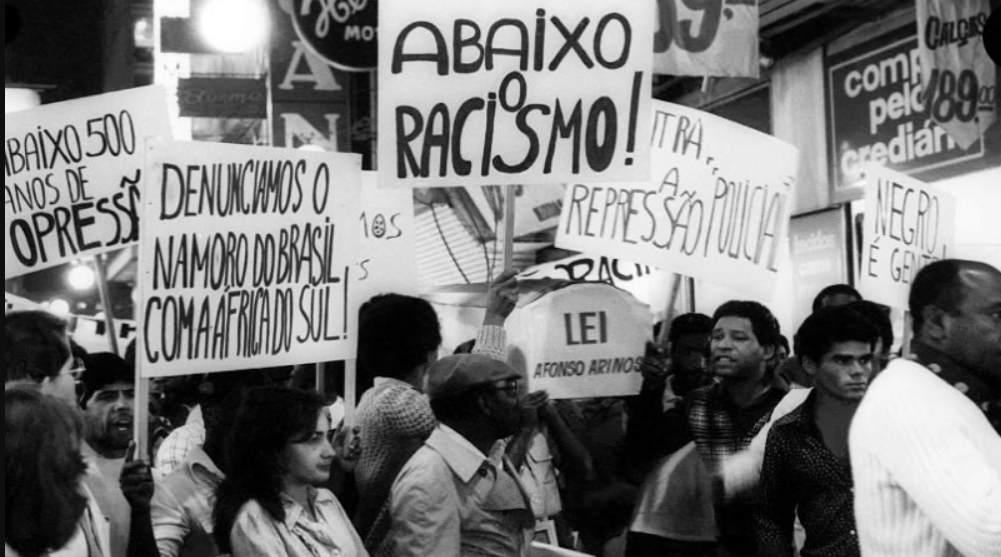 The Movimento Negro Unificado (MNU) or Unified Black Movement, the most notable black civil rights organization in Brazil, was founded in São Paulo, Brazil in 1978 by Thereza Santos and Eduardo Oliveira de Oliveira. The founders along with other black activists in Brazil found influence in the Civil Rights Movement in the United States and the anti-colonial movements in Africa during the previous decade. The MNU was also influenced by an earlier organization, the Grupo Evolução (GE) or Evolution Group, which was created in 1971. The GE used cultural performances such as dance, plays, and poetry to raise racial consciousness among Afro-Brazilians. Their performances would educate and set the stage for future MNU leaders Hamilton Cardoso, Vanderei Jose Maria, and Rafael Pinto.

The MNU was formed to challenge racial and class discrimination in Brazil during the 1970s. Many university-educated black Brazilians were promised Democracia Racial or Racial Democracy, a term Brazilian scholars used to argue that race relations in Brazil were now fair, and racism and discrimination were no longer issues. Many educated blacks thought otherwise.  They were often frustrated by the refusal of Brazilian companies to hire them or treat them equally despite their education. The immediate catalyst however was the death of Robson Luz, a black taxi driver who was tortured and killed by São Paulo police in April 1978.  On June 18, 1978, black activists met and created an organization called Movimento Unificado contra a Discriminação Racial (MUCDR) or the United Movement Against Racial Discrimination.

Three weeks later on July 7, the MUCDR protested Luz’s death and the race-based expulsion of four black volleyball team members. The MUCDR announced its existence that day by protesting outside São Paulo’s Municipal Theater. In a public address to the Brazilian people, the MUCDR proclaimed that its was on a campaign to combat racial discrimination, police repression, underemployment and cultural marginalization. On July 23, “black” was added to the name making it the Movimento Negro Unificado contra a Discriminação Racial (MNUCDR) or the United Black Movement Against Racial Discrimination.

The First National Congress of the MNUCDR met December 14-16, 1979 in Rio de Janeiro, where the name was changed to MNU. The MNU’s significance lay in its mission. For the first time since the Frente Negra Brasilia in the 1930s, the MNU brought together a number of independent black political groups across Brazil, creating one national black movement.

In 2001, the MNU was represented at the world summit on race relations in Durban, South Africa where it again raised the issue of racial discrimination in Brazil. Perhaps its greatest success was in getting the Brazilian government to declare November 20 National Black Consciousness Day.