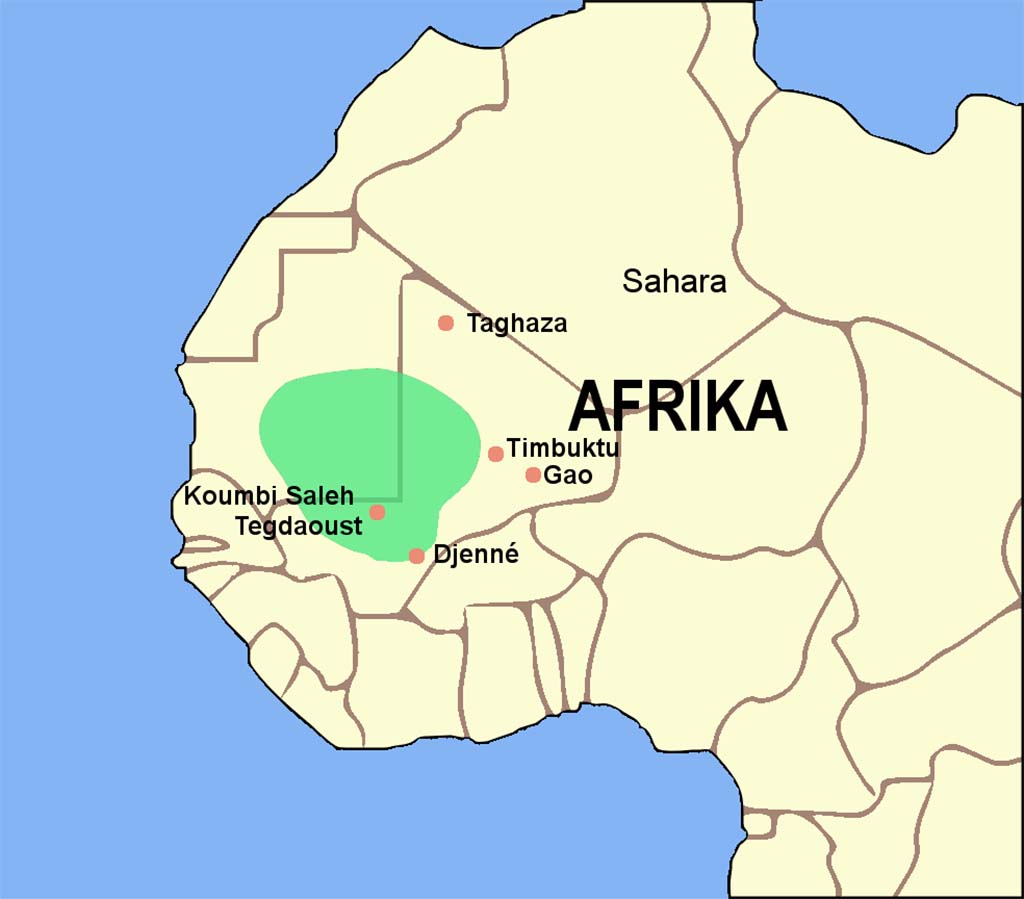 Located in the Western region of Africa, Ancient Ghana occupied an area that includes the present-day nations of Mauritania and Mali, was the first of three powerful centralized states to emerge in the savanna, a vast, flat grassland area between the Sahara Desert on the north and the coastal rain forest along the Atlantic Ocean to the south.  Ghana flourished in the 8th through 11th centuries because of its control of major routes of the Trans-Saharan trade of salt and gold.

The origin of Ghana is uncertain although by the first century A.D. a number of farming clans of the Soninke, a Mande-speaking group, began to settle in the region.  By 750 A.D. the Soninke came together under the leadership of Dinga Cisse, perhaps in response to nomadic attacks.  Dinga Cisse is considered the first ruler of unified Ghana.  He established a capital at Kumbi Saleh which sat along one of the emerging Trans-Saharan trade routes.  Later the city of Audaghust became another major commercial center.

Over the centuries the Soninke people had developed a trade in various items including copper, salt, gold, ivory and some slaves. With the introduction of the camel, the trading range of the Soninke expanded northward and the commerce itself became more lucrative.  Ghanaian rulers taxed both local and Trans-Saharan commerce to support a bureaucracy and army.

Islam was introduced to Ghana by the 9th Century. The spread of the religion introduced Ghana to a larger world of commerce and religion.  From that point Islam was practiced by many Ghanaians while Muslim and Jewish traders from Egypt and other areas of North Africa settled in Kumbi Saleh, which around 1060 had a population estimated at nearly 30,000, and in the smaller city of Audaghust.

In 1076, the Almoravids, a Muslim group, conquered Ghana.  They sought both to make Islam the sole faith of the population and to control the lucrative Trans-Saharan trade routes.  They failed in both areas.  However, the Ghanaian Empire ended with their conquest.

The modern nation of Ghana is named after the ancient empire although there is no territory shared by the two states.