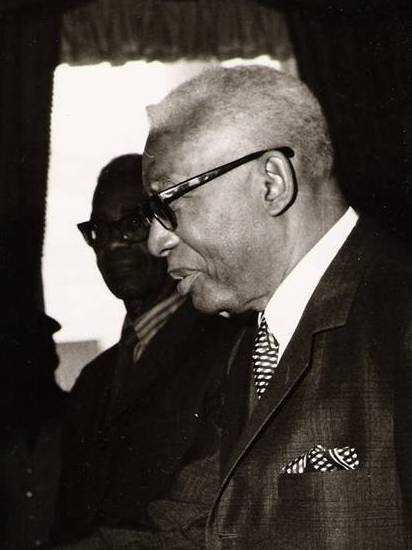 Dr. François Duvalier, also known as “Papa Doc,” was the president of Haiti from 1957 to 1971. His regime was notorious for its autocratic and corrupt rule.

Born on April 14, 1907 in the Haitian capital Port-au-Prince, François Duvalier was the son of Duval Duvalier and Uritia Abraham. Politically active from an early age, Duvalier wrote articles for the nationalist and anti-American occupation newspaper, Action Nationale under the name Abderrahman. In 1934, he attended medical school at the University of Haiti and subsequently worked at various hospitals and clinics around the city. Despite his earlier opposition to U.S. control of Haiti, Duvalier later participated in the U.S. sponsored campaigns against malaria and yaws in the 1940s.

Continuing his political activism, Duvalier co-founded the journal Les Griots. The journal promoted Négritude (a form of black nationalism) and championed the black minority against the Europeanized mixed-race elite. Duvalier asserted in his book, Le Problème des classes à travers l’histoire d’Haïti, that the black middle class should declare its power and overthrow the elite mulatto hegemony. Throwing support behind Dumarsais Estimé’s government, Duvalier served in the Ministries of Public Health and Labor, giving him his first role in government. When a bloodless coup in 1950 elevated Colonel Paul Magloire to the Presidency, Duvalier went into hiding.

By 1956, riots had forced Magloire to resign and Duvalier presented himself as the heir to Estimé’s reformist government. He won the 1957 election, though some claimed that the Forces Armee de Haiti rigged the results. Initially presenting himself as a reconciliatory president, within months Duvalier silenced opposition and began distributing self-promoting propaganda. To avoid the threat of a military coup, “Papa Doc,” as he came to be called, reorganized the armed forces and created a secret police, the Milice Volontaires de la Sécurité Nationale, or the Tontons Macoutes. Giving the Tontons Macoutes the license to intimidate, extort, and murder, the militia quieted opponents and forcibly bolstered support for the president. Duvalier defeated an attempted coup in 1958 and survived a major heart attack in 1959, both of which increased his paranoia.

In the 1960s, Duvalier proved to be resistant to both domestic and foreign challenges. At home, he intensified his campaign of terror and consequently hundreds of Haitians were arrested, beaten, or simply disappeared. His corrupt policies also indirectly killed thousands of Haitians as food shortages became rampant.

In 1964, Duvalier’s supporters drafted a new constitution that declared him president-for-life. From that point many professionals fled the country, resulting in the collapse of the educational and health care systems. Duvalier’s government additionally confiscated peasant land holdings and siphoned about $500 million of taxes and foreign aid. Malnutrition and famine became endemic. An estimated 40,000 Haitians died under his rule from 1957 to 1971.

Duvalier also resisted foreign criticism. He challenged Cuba, the Dominican Republic, and the United States, leaving the country with few political allies. “Papa Doc” maintained his presidency until his death in 1971. His son, Jean-Claude Duvalier, succeeded him.