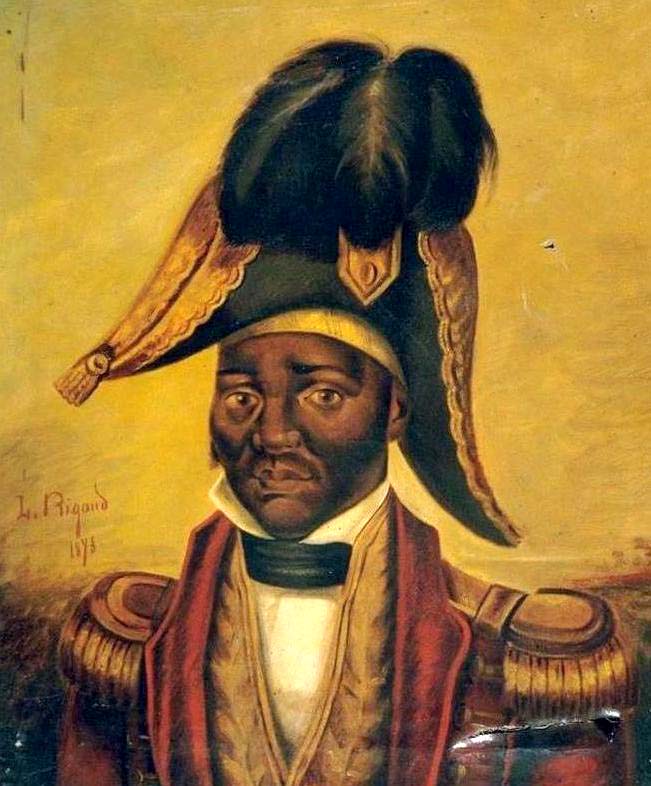 Reviled for his brutality yet honored as one of the founding fathers of Haiti, Jean-Jacques Dessalines was second in command under Toussaint L’Overture during the Haitian Revolution and was the general who emerged after L’Overture’s capture to lead the insurgents in declaring Haitian independence on January 1, 1804.

Unable to read or write, Dessalines was nonetheless a quick study under L’Overture earning the nickname “the Tiger” for his fury in battle.  In 1794 Dessalines’s military skill and leadership were vital to L’Overture’s success in capturing the Spanish-controlled eastern half of the island, and in return, L’Overture made him governor of the south.

For a brief period after L’Overture’s capture in 1802 Dessalines appeared to be siding with the French, but the move was nothing more than a ruse designed to trick the French into trusting Dessalines so that he could regroup the insurgents and continue the fight for independence.  It was successful.  When Dessalines proclaimed Saint Dominque’s independence, he chose the name Haiti for his country, the name used by the island’s aboriginal inhabitants.

Independence, however, did not bring peace, and from January 1804 until his death two years later, Dessalines “governed with terror.”  Like L’Overture, Dessalines had himself appointed governor “for life.”  He later changed his title to emperor—emulating Napoleon—and crowned his wife, Claire-Heureuse, empress.  Fearing a French resurgence and the reinstatement of slavery that would accompany it, he ordered the massacre of approximately 5,000 of the island’s white men, women, and children declaring “I have saved my country. I have avenged America.”  It was a move that two of Dessaline’s most influential generals, Alexandre Pétion and Henri Christophe, could not countenance and one that spoke to the growing political instability of the new government.

On August 17, 1806, Dessalines met a violent death at the hands of his lieutenants when he was ambushed; his body was dragged through the streets before it was dismembered. The example of the Haitian Revolution and leaders such as L’Overture and Dessalines has become both an inspiration and a warning about the “possibilities and dangers of revolution.”