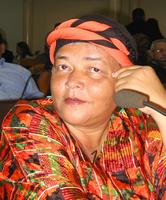 The first black person elected to the Nicaraguan National Assembly, Loria Raquel Dixon Brautigam was elected to represent the North Atlantic Autonomous Region of Nicaragua in 2006. Before entering politics, Brautigam worked as a nurse in Bilwiskana, Río Coco and served as director of the Unidad Policlínica de Puerto Cabeza y Enfermera from 1978 to 1990. In 1996, she received her bachelor’s degree in business administration from Universidad Centroamericana in San Salvador, the capital of El Salvador. After receiving her degree, she assumed responsibility for the marketing division of her family’s business, operating gas stations in an around Bluefields, Nicaragua.

Brautigam joined Frente Sandinista de Liberación Nacional (FSLN) in 1983. FSLN, whose members are known as Sandinistas, is a socialist political party formed in 1961. They became a guerrilla revolutionary organization in the late 1960s and succeeded in overthrowing the Nicaraguan government and assuming power in 1979.  In 1984, the Sandinistas held national elections, and the leader of FSLN, Daniel Ortega, was elected president. In 1990, he lost the election, but was reelected in 2006.

Brautigam gained prominence within the party in 1987.  By serving as part of the Sandinistas’ departmental leadership team, she gained both political experience and national exposure.   She was also a member of Mor de Mujeres in the North Atlantic Autonomous Region of Nicaragua.  In 2006, Brautigam was elected to the National Assembly along with many other Sandinistas.  Their election coincided with Daniel Ortega’s return to power.