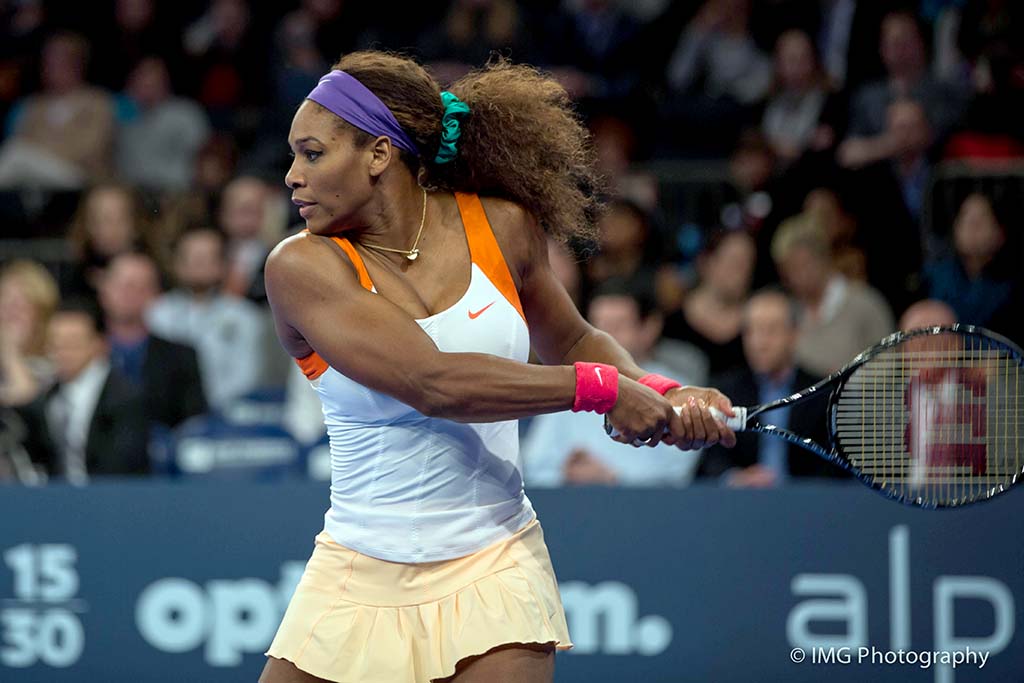 Williams, the youngest of five siblings, grew up in Compton, California where she began to play tennis at the age of four. At the age of nine, Williams and her family moved to West Palm Beach, Florida where she dominated the field of junior tennis competitors. She joined the professional ranks in 1995. Four years after her debut, Williams established herself as a top-ranked player when she won the U.S. Open, the Grand Slam Cup, and three other Women’s Tennis Association (WTA) singles titles. In 2002-2003, Williams completed a “Serena Slam,” winning titles at the Australian Open, French Open, U.S. Open, and Wimbledon in the UK. Also in 2002, Williams assumed the world No. 1 ranking for the first time.

In the middle of 2003, Williams’ winning streak came to an end when she injured her knee. The next several years proved difficult, as she struggled to remain healthy for long periods of time. By 2007, however, Williams returned to form. That year, she won the Australian Open, followed in 2008 by victories at the Olympics and the U.S. Open. Williams was once again ranked world No. 1 and had a phenomenal 2009, securing 3 Grand Slams. In 2010, however, Williams suffered from a potentially life-threatening pulmonary embolism, which sidelined her for several months. During this period, she was also recovering from deep cuts on her feet suffered from stepping on glass, which required two surgeries to heal.

Between 2012 and 2016, Williams again became the leading player on the WTA tour. Though she was not unbeatable, she was dominant in the Grand Slams, completing her second “Serena Slam,” in 2014-2015. Amazingly, in 2015, after her victory at the French Open, Williams had as many major titles to her name (21) as the rest of the singles players on the tour combined. On January 28, 2017, Williams won her most recent Grand Slam at the Australian Open, defeating her sister Venus for the title. The victory was her 23rd Grand Slam singles title, the most in the Open-era. Incredibly, Williams later revealed she was pregnant with her first child at the time of her victory. She would deliver the baby, a girl named Alexis Olympia Ohanian Jr. on September 1, 2017. Her husband is Alexis Kerry Ohanian, Sr., an entrepreneur in the technology field, who co-founded the website Reddit.

Williams’ achievements reach beyond the tennis court. In 2004, she launched a custom-designed Nike apparel line, as well as her own clothing line, Aneres. Committed to philanthropic work, Williams is involved with numerous charitable organizations, such as The Owl Foundation, an organization that funds programs addressing learning problems for individuals who experience academic failure. In 2008, she helped fund the construction of the Serena Williams Secondary School in Matooni, Kenya and her Foundation also provides scholarships in the United States. Williams has been a UNICEF Goodwill Ambassador with a focus on education and has donated significant resources to nonprofits addressing gun violence. In 2016, she went further, joining with her sister Venus to found the Yetunde Price Resource Center. It honors the memory of their sister, who was tragically killed in a 2003 shooting. The Center aims to aid those affected by community violence.

Williams was defeated in the 2018 U.S. Open by 20-year-old newcomer Naomi Osaka in a match that was marred by controversy because of the penalties imposed on her.  Williams currently resides in Florida and California with husband, Alexis Ohanian, co-founder of Reddit, and their daughter, Alexis Olympia Ohanian Jr.