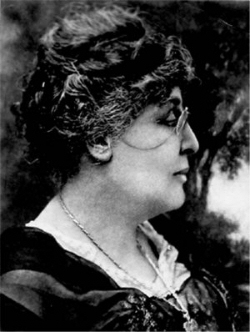 Margaret Murray Washington, born March 9, 1865, was one of ten children born to sharecroppers. Her father was of Irish descent and her mother was African American.  Murray attended Fisk University for eight years and graduated in 1889. The following year she became “Lady Principal” at Tuskegee Institute where she met Booker T. Washington. In 1892 she married Washington, becoming his third wife.

Murray wrote Washington’s speeches, assisted him in expanding the school, and accompanied him on lecture tours as his fame grew.  Her own presentations usually directed at audiences of African American women, promoted what she termed self-improvements in habits and hygiene.  Murray also served on Tuskegee’s executive board and later became dean of women.  In February 1892, Murray began a Tuskegee program which provided child care, education and training in literacy, home care and hygiene for women in central Alabama which she called “mother’s meetings.”

In July 1895, Murray attended the Boston, Massachusetts meeting which established the National Federation of Afro-American Women (NFAW). After being elected president the following year, she helped merge the NFAW and the Colored Women’s League (CWL) to form the National Association of Colored Women (NACW). She would also serve this newly established organization first as secretary of the executive board and then as president beginning in 1914.

When Margaret Murray Washington died on June 4, 1925, condolences poured into Tuskegee Institute from across the nation. Even President Calvin Coolidge sent his greatest sympathies. Murray was remembered by friends, family, students, colleagues and community members as an individual who gave compassion and leadership to African American women in social service, education, reform and race-related work.  She believed in the “Tuskegee Spirit,” the idea of seeing the Institute’s training as an essential instrument in interracial cooperation in the South.