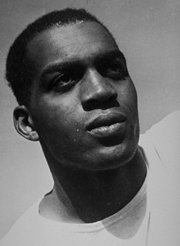 Kenneth S. Washington was one of the first black college football stars on the West Coast and one of two African Americans to reintegrate the National Football League (NFL) when he joined the Los Angeles Rams in 1946. His stardom as a running back began at Abraham Lincoln High School in his native Los Angeles. After graduation, Washington played as a tailback at the University of California, Los Angeles (UCLA), from 1937 to 1939. This was a time when only a dozen blacks were numbered collectively among players on white college football teams—all outside the South. At UCLA, Washington found himself teamed with three other African American football players—athletic greats Jackie Robinson, Woody Strode, and with one other who was a substitute player—an unprecedented number of black athletes on a single team. Despite leading the nation in total offense in 1939 and rushing for 1,914 yards in his college career, Washington was snubbed as contender for first team All-American, the postseason East-West Shrine Game, and the NFL during the peak of his career.

Despite these setbacks Washington continued his commitment to athletic excellence when he joined the Hollywood Bears and later the San Francisco Clippers in the Pacific Coast Pro Football League (1940-41 and 1945) and in the American Football League in 1944. Washington’s greatest impact, however, was reintegrating the NFL (along with UCLA teammate Woody Strode) in 1946. In this year– when the Cleveland Rams relocated to Los Angeles– the contract with Los Angeles Coliseum stipulated that the team would lose its lease if the team was not integrated. The Rams’ agreement with these terms ended the NFL’s 12-year ban on black players. Unfortunately for Washington, he suffered several knee injuries and, after three sub-par seasons with the team, he retired in 1948. In 1956, Washington was inducted into the College Football Hall of Fame, and his jersey number “13” was the first to be retired at UCLA.