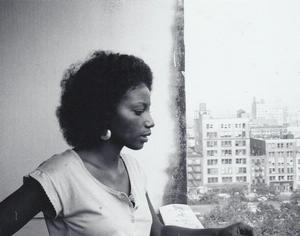 Michele Wallace, a feminist scholar, writer and educator, was born on January 4, 1952 in New York City to Robert Earl Wallace, a musician, and Faith Ringgold, a well-known artist and author. In 1978, at age 26, she published her first book, Black Macho and the Myth of the Superwoman, setting off a maelstrom of controversy in the black community and beyond.  In 1990 Wallace published Invisibility Blues: From Pop to Theory.  That same year Black Macho was re-released with a 20-page introduction by the author titled ”How I Saw It Then, How I See It Now,” detailing her views regarding the controversy.

In Black Macho Wallace asserted that the Black Power movement of the 1960s was the black man’s pursuit of his own power and that it was motivated by revenge, not equality. She also noted black male attraction to white women and questioned whether the black male could truly love a black woman. The book is an exploration of the black female in creating a voice and defining life, rather than leaving it to someone else’s interpretation. Significant is Wallace’s later understanding that history, in order “to be ‘true’ in any sense,…has to be dialogic,” meaning it has to include other contexts, experiences and views.

Growing up in Harlem in the turbulent 1960s, Wallace, like many young people, rejected middle-class values of self-satisfaction and complacency. She challenged these values by speaking out about racial oppression and women’s oppression, topics not discussed in her middle class world.  She found her voice in her writing. A short story she wrote in college recalling a grade school experience of racism earned her a student prize.

As a young girl, Wallace attended the elementary school at Our Savior Lutheran Church and then transferred to the ultra-progressive New Lincoln School in Harlem. In 1969 she enrolled at Howard University but returned to Harlem and attended City College, a branch of City University of New York, where she earned a BA in English and creative writing in 1974, and an MA in 1984.

During the 1970s Wallace was involved in a number of artistic and political organizations. She founded Women Student Artists for Black Liberation, was a founding member of the National Black Feminist Organization, was a member of Art Without Walls, and helped organize the Sojourner Truth Festival of the Arts.

From 1974 to 1975 Wallace was book review researcher at Newsweek magazine in New York City. In 1976 she became an instructor in journalism at New York University (NYU) and later became an assistant professor of English.

Since 1995 Wallace has been a professor of English and Women’s Studies at City College of New York.