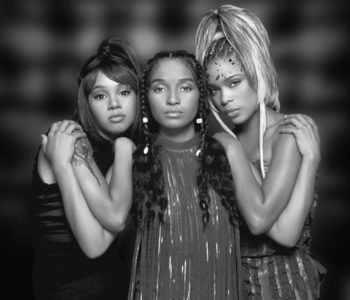 TLC, a three-member American R&B girl group which incorporates elements of hip-hop and pop, was formed in 1991 in Atlanta, Georgia. Two of the members, Tionne Watkins and Lisa Lopes, were originally part of group called 2nd Nature with Crystal Jones.  The group’s name was TLC-Skee with TLC being an acronym for the three girls’ first names. Due to conflicts within the group, Crystal Jones left and as a two-member group, TLC-Skee was featured on a track for Damian Dame’s 1991 self-titled album. In 1991, Rozonda Thomas, a part-time backup dancer for Damian Dame was chosen to be the third member of the group.

After Thomas was signed the group’s name shortened to TLC. In order to keep the acronym relevant to the girls’ names each member was given a new stage name. Tionne Watkins became “T-Boz,” Lisa Lopes became “Left-Eye,” and Rozonda Thomas became “Chilli.” On February 25, 1992, TLC released their debut album, Ooooooohhh… On the TLC Tip. The album was a commercial success with three singles making it into the top ten of the Billboard Hot 100 and was certified as quadruple-platinum in the United States meaning it sold four million copies.

Throughout the group’s career, TLC has had nine singles in the top ten of the Billboard Hot 100 charts. TLC has also recorded four multi-platinum albums. Of those four multi-platinum albums, their second studio album CrazySexyCool, released in 1994, received diamond certification from the Recording Industry Association of America (RIAA). This is still the only album by a female group to have received a diamond certification from the RIAA.  Their third album FanMail was released in 1999.

TLC is still the best-selling American girl group in the world with 65 million albums sold in total and is second worldwide only to the English girl group, Spice Girls who have sold 85 million albums in total. Since the group’s debut they have won 56 awards. Among the numerous awards the group has won most notably, five Grammy awards, three Billboard Music awards, and five Soul Train Music awards.

Among those awards, TLC won the Grammy award for Best R&B Album as well as the Best R&B Performance by a Duo or Group with Vocal award in 1996 and 2000. In 2000, TLC also won the Grammy award for Best R&B Song for their song “No Scrubs.” At the 1996 Billboard Music Awards, TLC won Artist of the Year, R&B Artist of the Year, and R&B Single of the Year for “Creep.” In 2012 TLC received the Legend Award during the 2013 MTV Japan Awards.

TLC were music and fashion icons of the 1990s, but were also known for promoting safe sex, anti-drug, and HIV/AIDS prevention messages through their music. The group also promoted the message of female empowerment in their song lyrics. In the late 1990s, Tionne “T-Boz” Watkins, who battled sickle-cell anemia, became a spokesperson for the Sickle Cell Disease Association of American.

On April 25, 2002, rapper of the group Lisa “Left Eye” Lopes died in a car crash while filming a documentary in Honduras. TLC continued as a two-member group until 2005.  In 2007 they started to make appearances again as guest performers for award shows, music festivals, and concerts. In 2015, TLC went on a North American tour with New Kids on the Block and Nelly, making it the first tour the group did in fifteen years. On June 30, 2017, TLC released their self-titled fifth studio album.