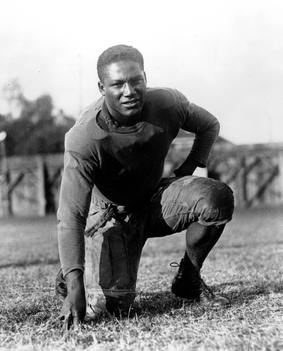 A descendant of the Shawnee Chief Tecumseh and African slaves, he was the youngest of ten children of Cyrus Taylor, a bricklayer.  Orphaned at age 5, Taylor was taken in and raised by the DiJulio family of Seattle.  Although he was born without a left hand, Taylor showed his athletic prowess while growing up in Seattle, Washington where he was a starring athlete in football and baseball. In 1922, Taylor was a running back for the Franklin High School football team in Seattle.  As Team Captain, he helped lead the team to the Washington State Championship. In 1923, Taylor was selected as the State of Washington High School Athlete of the year.

In 1923, Taylor accepted the scholarship offered to him by “Gloomy” Gus Henderson, the head football coach at the University of Southern California (USC) in Los, Angeles.  He moved from from the running back position to offensive guard and became one of the first African American football players at USC.  Taylor also ran one season of track while at USC.  He competed in the 100-metersprint and was a member of the USC mile relay team that set a World Record in 1925.

During the 1925 season, Taylor, the only American member of the USC football team, set a school record by playing offense, defense, and on special teams as a kicker. For his efforts, Taylor became the first All-American at USC in 1925.

After graduating from USC, Taylor became the Head Football Coach and Athletic Director at Southern University in Baton Rouge, Louisiana. In 1931, Taylor led Southern to its first undefeated season in his final season as Southern’s Head Football Coach. Prior to leaving Southern, Taylor put a small college from Northern Louisiana on Southern’s 1932 football schedule, known at the time as the Louisiana Negro Normal and Industrial Institute and now known as Grambling State University.  The game between the two Louisiana institutions would become known as the “Bayou Classic.”

Bryce Union Taylor passed away on September 18, 1974 in Downey, California.  He was survived by his wife, his three children, and two grandchildren.