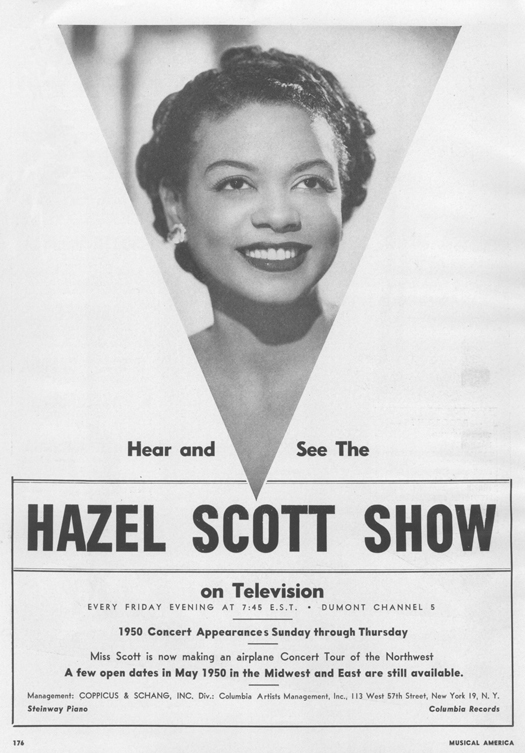 Hazel Scott was born on June 11, 1920, in Port of Spain, Trinidad.  In 1924, Scott and her parents migrated to Harlem, New York, where Hazel, a musical prodigy, studied classical piano with Paul Wagner, a Juilliard professor. In the late 1930s and early 1940s, her career blossomed as she became a regular performer, earning a weekly salary of $4,000 at New York’s elegant dinner club Café Society. Her husband, Adam Clayton Powell, Jr., once fondly referred to her as the “darling of Café Society.”

In 1938, her talent brought her to Broadway, where she performed in the musicals Singing Out the News and, four years later, Priorities of 1942. The 1940s were thrilling years for Scott, with appearances in major Hollywood productions like Something to Shout About, I Dood It, and The Heat’s On in 1943, Broadway Rhythm in 1944, and Rhapsody in Blue in 1945. Scott distinguished herself from other black actors by refusing to play the traditional roles, such as maids and prostitutes, offered by movie executives to black actresses. Instead, Scott made cameo appearances in movies playing the piano.

In 1949, Scott won a racial discrimination lawsuit against Pasco, Washington restaurant owners Harry and Blanche Utz. The year following her legal victory, the DuMont Network televised a 15-minute musical variety program featuring Hazel Scott. Scott’s show was the first to feature an African American female host. That same year, faced with communist ties, she testified before the House Un-American Activities Committee (HUAC) to clear her name. Shortly after her HUAC appearance, however, the network cancelled her show.

For a brief moment, Scott was a superstar, but her militancy and racial pride halted her ascent. Her onscreen image of sophistication, intelligence, and dignity inspired African Americans. Although her career faded, Scott’s initial television success paved the way for Billy Daniels, Nat King Cole, Diahann Carroll, Sammy Davis, Jr., and Oprah Winfrey. Hazel Scott died on October 2, 1981, at Mount Sinai Medical Center in New York. She was 61.