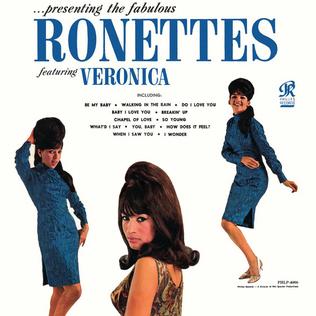 Ronnie Spector is best known for being the lead singer of the legendary pop-rock girl group of the 1960’s, The Ronettes. Her sultry and edgy voice in early rock’s most famous records stamps her as an icon in music history.

She was born Veronica Yvette Bennett on August 10, 1943 in Spanish Harlem to an African American and Cherokee mother and Irish American father. Her love for music started at a young age, having grown up around aunts and uncles who were gifted at singing and playing musical instruments. In 1959, she performed at the Apollo Theater’s Amateur Night contest along with her older sister and cousins as The Darling Sisters.

First place at the amateur contest turned into music lessons, which turned into performing at birthday parties, sock hops, and bar mitzvahs throughout 1960. Ronnie’s lead vocals accompanied by the harmonies of Estelle and Nedra caught the attention of Colpix Records in 1961. A succession of singles on the label as Ronnie and the Relatives weren’t commercially successful. In 1962, after regular gigs at the Peppermint Lounge and the Brooklyn Fox Theatre in New York as back-up singers and dancers, stardom came. That year Ronnie and the girls met producer Phil Spector and signed to his label, Philles Records.

The Ronettes’ chart-topping hits spanned from 1963 to 1966: “Be My Baby”, “Baby I Love You”, and “Do I Love You” just to name a few. Their only LP, Presenting the Fabulous Ronettes Featuring Veronica, debuted in November 1964. Phil Spector’s “wall of sound” recording technique and the band’s unique sense of style set them apart from their contemporaries. They sported dark eye makeup, bouffants, and sexy stage wear. Their success reached Great Britain where the Rolling Stones opened up several shows for their tour and they formed friendships with the Beatles.

Ronnie married Phil Spector in 1968, a year after The Ronettes’ last live performance in January 1967. She had a couple of solo singles under the stage name ‘Veronica’ in the late 1960s but her musical career was put on hold when she and her husband began abusing alcohol and drugs. During this time Ronnie was held in virtual captivity by Phil in their mansion. They adopted a son, Donté, in 1969, but problems continued until her divorce from Phil in 1974. After the divorce Ronnie kept the last name Spector. She married Jonathan Greenfield in 1982.

Throughout the 1970s and 1980s, Ronnie’s solo career had its ups and downs. She revamped The Ronettes with new members in the early 1970s but with little success. She continued, however, to work with Billy Joel, George Harrison, Bruce Springsteen and other leading artists and finally charted again in her 1986 duet with Eddie Money, “Take Me Home Tonight,” which enjoyed a Grammy nod and ample MTV airplay. She continued to make music with rock and roll greats well into the early 21st Century.

Including her career with The Ronettes, Ronnie Spector has made eight albums and EPs, wrote a memoir in 1990, and was inducted into the Rock and Roll Hall of Fame in 2007 with The Ronettes.