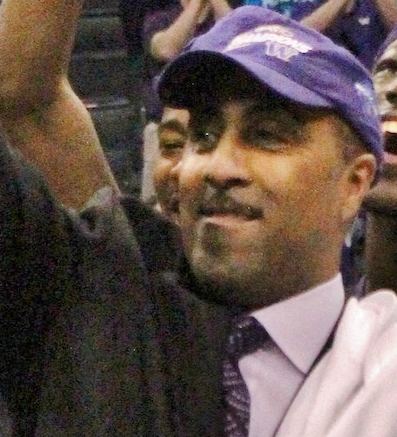 Longtime University of Washington head basketball coach Lorenzo Romar was born November 13, 1958, and grew up in Compton, California, where he went on to play at Cerritos Community College after high school. After playing two years for Cerritos, he transferred and played for the University of Washington from 1978 to 1980, where he averaged 7.7 points and 1.9 rebounds a game. After his collegiate career, he was drafted by the Golden State Warriors and then later played for the Milwaukee (Wisconsin) Bucks and Detroit (Michigan) Pistons where over five years he averaged 5.9 points, 1.3 rebounds, and 3.5 assists.

After his brief five year playing career ended, he started coaching for Athletes in Action, a sports ministry for college athletes based in Xenia, Ohio. After coaching there, he was hired as an assistant coach for UCLA under head coach Jim Harrick from 1992 to 1996. While at that institution, he recruited many of the players on the 1995 UCLA team that won the national championship.

Romar rejuvenated and brought new energy the Huskies basketball program which had become mediocre in recent years in the Pac 10 Conference. In 2004 the University of Washington basketball team played in the NCAA national tournament for the first time in five years under Romar’s leadership. The very next year, Washington won the then Pac-10 tournament (it is now the Pac-12). That year, they also made to the “Sweet Sixteen” in NCAA national competition for the first time since 1998. They were defeated by the University of Louisville (Kentucky).

In 2006 the University of Washington made a third consecutive appearance in the NCAA tournament and again reached the Sweet Sixteen level. Romar was named the Pac-10 coach of the year, and his team would boast a 4th seed in the tournament before being eliminated during the second round of competition. On November 14, 2014, Lorenzo Romar became the second all-time most winning coach in the history of University of Washington basketball behind legendary Clarence “Hec” Edmundson, who coached the Huskies from 1920 to 1947.

Romar’s success, however, eventually ended.  From 2012 to 2016, his Husky teams had a disappointing, near .500 seasons every year.  In the 2016–2017 season, the Huskies had a dismal record of 9-22, despite having potential number 1 NBA draft pick in Markelle Fultz, who averaged 23.2 points, 5.7 rebounds, and 5.9 assists a game. Lorenzo Romar’s fifteen-year career with the UW Huskie Basketball team ended on March 15, 2017 when he was fired by University of Washington Athletic Director Jennifer Cohen.