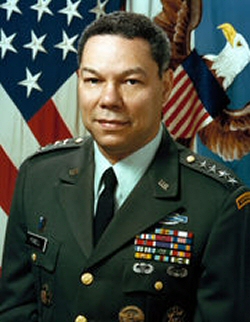 Colin Powell was a retired four-star United States Army General who was the first African American to serve as National Security Advisor, Chairman of the Joints Chief of Staff, and Secretary of State.

Colin Powell was born on April 5, 1937, in the Bronx, New York to Jamaican immigrant parents. He attended public schools in the Hunts Point area of South Bronx and was eventually accepted to New York University. Lacking the funds to attend this private university, Powell instead enrolled at the City University of New York, where he joined the Reserve Officer Training Corps (ROTC), graduating with a degree in geology and as a second lieutenant in the infantry. Taking his first post abroad in West Germany, Powell soon realized that the advanced racial integration of the armed forces would yield tremendous upward opportunities, and he decided to make a career in the army.

Powell served two tours of duty in Vietnam and received eleven medals for exemplary service. In 1971, he took advantage of the Army’s college funding programs, earning a master’s degree from George Washington University. While at George Washington University, he received a coveted White House fellowship. In 1972, Powell was appointed battalion commander of the elite 101st Airborne in South Korea. By 1979, he was a brigadier general and was deputy commander at Fort Leavenworth. Between 1983 and 1986, Powell, then a three-star general, commanded the Fifth Corps, U.S. Army, in Frankfurt, Germany.

In 1987, at the age of 49, General Colin Powell was named National Security Advisor in the Ronald Reagan administration. In 1989, newly elected President George H.W. Bush appointed Powell as chairman of the Joint Chiefs of Staff. During his tenure, Powell oversaw U.S. military actions in Panama, the Philippines, and Operation Desert Storm. Powell was both the youngest person, and the first African American, to hold this position. He served under both the Bush and Clinton Administrations until his retirement in 1993 from military service after thirty-five years.

Because of his immense popularity, many assumed Powell would enter politics after retirement, but he instead devoted his time to family, writing, and public speaking. He ultimately returned to the White House in 2001 as the newly appointed Secretary of State by President George W. Bush, once again as the first African American to hold the post.

Colin Powell resigned as Secretary of State in January 2004. Despite numerous requests from both parties to join the political circles and run for political office, Powell chose to remain in private life. He focused his attention in several areas of the private sector, including serving on the Board of Trustees at Howard University, the Board of Directors of the United Negro College Fund, the Board of Directors of the Boys and Girls Club, and as chairman of the Eisenhower Fellowship Program. He also continued to work with his non-profit organization, America’s Promise. Founded in 1997, the organization is dedicated to improving the lives of youth and helping them succeed.

Powell died at the Walter Reed National Miltiary Medical Center in Bethesda, Maryland on October 18, 2021; he was 84 years old. Despite being fully vaccinated, the cause of death was complications from COVID-19. Powell also suffered from a compromised immune system because he was being treated for multiple myeloma. He is survived by his wife, Alma Vivian (Johnson); two daughters, Anne and Linda; a son, Micheal; and four grandchildren.