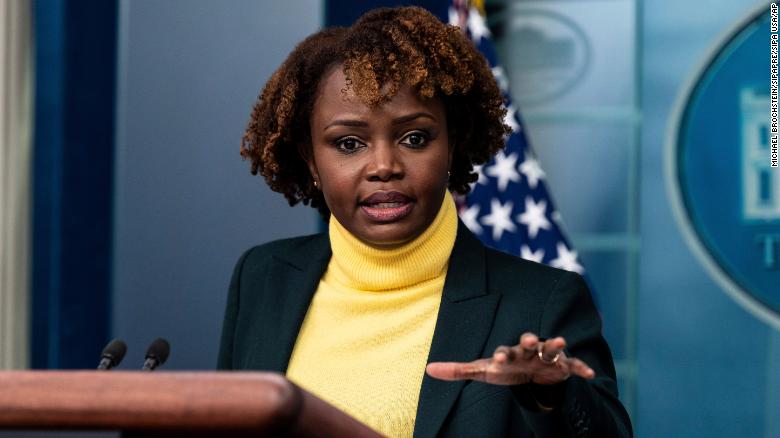 Born in Fort-de-France, Martinique to Haitian parents on August 13, 1977, Karine Jean-Pierre is the eldest of three siblings. In 1982 the family moved to Queens Village, New York, where Jean-Pierre was raised. Her mother was a home health aide, and her father was a taxi driver, even though he had earned an engineering degree in Haiti. Their work schedules left Jean-Pierre responsible for caring for her younger siblings.

Jean-Pierre earned a B.S. from the New York Institute of Technology in 1997. In 2003, she graduated with an M.P.A. from the School of Public and International Affairs at  Columbia University. During her time at Columbia, she served in student government, which solidified her passion for politics. Following graduate school, she served as the Deputy Chief of Staff for the New York City Council in 2004. That same year, she worked as the director of legislative and budget affairs for New York City Councilor James F. Gennaro. From 2006 to 2007, Jean-Pierre worked as the State and Local Outreach Coordinator for Wal-Mart Watch.

In May 2013, Jean-Pierre became the Senior Advisor in the Bill Thompson New York City mayoral campaign. In September of that year, she began working as Campaign Manager for Letitia James in her runoff for New York City Public Advocate. James won that election with 82.9 percent of the vote.

In December of 2013, Jean-Pierre became a lecturer in international and public affairs at Columbia University. Three years later she became Senior Advisor and National Spokesperson for Moveon.org. From April 2014 to January 2015, Jean-Pierre served as Campaign Manager for the ACLU Reproductive Freedom Initiative. In May of 2015 until February of 2016, she was Deputy Campaign Manager for the unsuccessful presidential campaign of former Maryland Governor Martin O’Malley.

Jean-Pierre was a senior advisor to the Joe Biden 2020 presidential campaign. After Biden’s election, she was named the White House Principal Deputy Press Secretary. She is the second Black woman (after Judy Smith in the George W. Bush White House), and the first openly gay woman, to ever hold the position. In May 2022, when White House press secretary Jen Psaki announced her departure, Karine Jean-Pierre was tapped to fill the position.

Jean-Pierre released her autobiography, Moving Forward, in 2019 where she shares her own mental health struggles and outlines her non-traditional path to politics. For her advocacy work and activism, she was named one of The Advocate’s 2011 Forty Under 40.