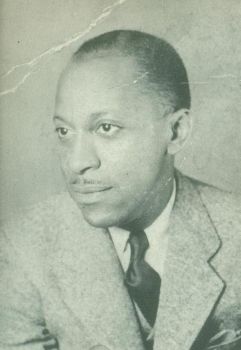 Dr. Lorenzo Johnston Greene was a pioneering African American historian.  Greene was born on November 16, 1899 in Ansonia, Connecticut.  He received his BA from Howard University in Washington, D.C. in 1924 and his MA in history from Columbia University in 1926.  From 1928 to 1933, Greene served as a field representative and research assistant to Carter Woodson, the director of the Association for the Study of Negro Life and History (now the Association for the Study of Afro-American Life and History, ASALH) in Washington, D.C.  This collaboration helped inspire the 1930 publication with Woodson of The Negro Wage Earner.  In 1931, Greene published The Employment of Negroes in the District of Columbia, a collaborative effort with Myra C. Callis.  Both studies demonstrate Greene’s interest in urban history, social history, and race relations.  Although he was inspired by Woodson and saw him as a mentor, Greene made his own lasting contributions to the field of history.  His most significant academic work was a pioneering study of blacks in Missouri entitled Missouri’s Black Heritage published in 1980 as a collaborative effort with Antonio F. Holland and Gary Kremer.

Lorenzo Greene served as instructor and professor of history at Lincoln University in Jefferson City, Missouri from 1933 to 1972.  During this period he continued his graduate studies and received his Ph.D. in history from Columbia University in 1942.  That same year, he published The Negro in Colonial New England, 1620-1776.  His interest in race and labor issues helped to revolutionize labor historiography with a greater emphasis on African Americans and other laborers, both free and unfree.  The Negro in Colonial New England is still considered the foundational work on the subject.

Professor Greene served on a number of committees and associations and was editor of the Midwest Journal from 1947 to 1956.  He was also the President of the Association for the Study of Negro Life and History from 1965 to 1966.  Greene’s academic interests included urban history, race and labor in Colonial America, Missouri history, the American Midwest, and New England history.

Dr. Greene’s interest in racial justice issues led him to serve as the Chairman of the Subcommittee on Education of the Missouri Advisory Committee to the United States Commission on Civil Rights from 1959 to 1961.   Greene worked actively on educational issues in Missouri and spearheaded efforts to desegregate Kansas City schools in the early 1970s.

Lorenzo Greene married Thomasina Tally in 1942.  He died on January 24, 1988 in Jefferson City, Missouri.  His Working with Carter G. Woodson, the Father of Black History, a Diary, 1928-1930 was published posthumously.  The Lorenzo Johnston Greene Papers are now available at the Library of Congress.