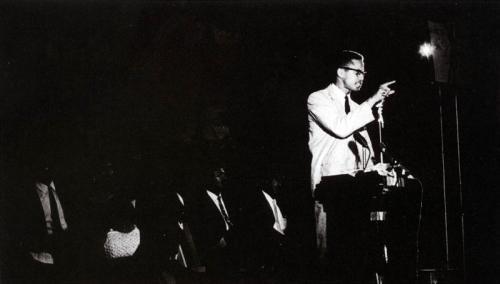 The Organization of Afro-American Unity (OAAU) was founded by Malcolm X, John Henrik Clarke, and other Black nationalist leaders on June 24, 1964 in Harlem, New York. Formed shortly after his break with the Nation of Islam, the OAAU was a secular institution that sought to unify 22 million non-Muslim African Americans with the people of the African Continent. The OAAU was modeled after the Organization of African Unity (OAU), a coalition of 53 African nations working to provide a unified political voice for the continent. In the coalition spirit of the OAU, Malcolm X sought to reconnect African Americans with their African heritage, establish economic independence, and promote African American self-determination. He also sought OAAU representation on the OAU.

The OAAU was designed to encompass all peoples of African origin in the Western hemisphere, as well those on the African continent. Malcolm X insisted that progress for African Americans was intimately tied to progress in Africa, and outlined a platform of five fronts for this progress called “The Basic Unity Program.” This program called for Restoration, Reorientation, Education, Economic Security, and Self-Defense as a means of promoting Pan-African unity and interests. With a strong focus on education as the primary means of repairing the damages of slavery, economic discrimination, and physical violence directed towards African Americans, the OAAU hoped to foster pan-African consciousness. Among the more controversial positions taken by the OAAU was the suggestion that leaders of African states held more legitimate political power for African Americans than did the American government.

At the founding conference, Malcolm X stressed the importance of escaping terms like “negro,” “integration,” or “emancipation,” insisting that such language was inherently pejorative and antithetical to the ideology of the OAAU. The OAAU called for African American-run institutions within the black community as well as increased participation in mainstream politics. In order to keep the OAAU strictly in African American hands, Malcolm X insisted that there be no monetary donations from non-African sources. The organization also refused membership to whites.

After Malcolm X was assassinated in the Audubon Ballroom on February 21, 1965, the fledgling movement died. Malcolm’s half-sister Ella Collins took over the OAAU, but without his charismatic leadership, most members deserted the organization. Nonetheless the OAAU became the inspiration for hundreds of “black power” groups that emerged during the next decade.