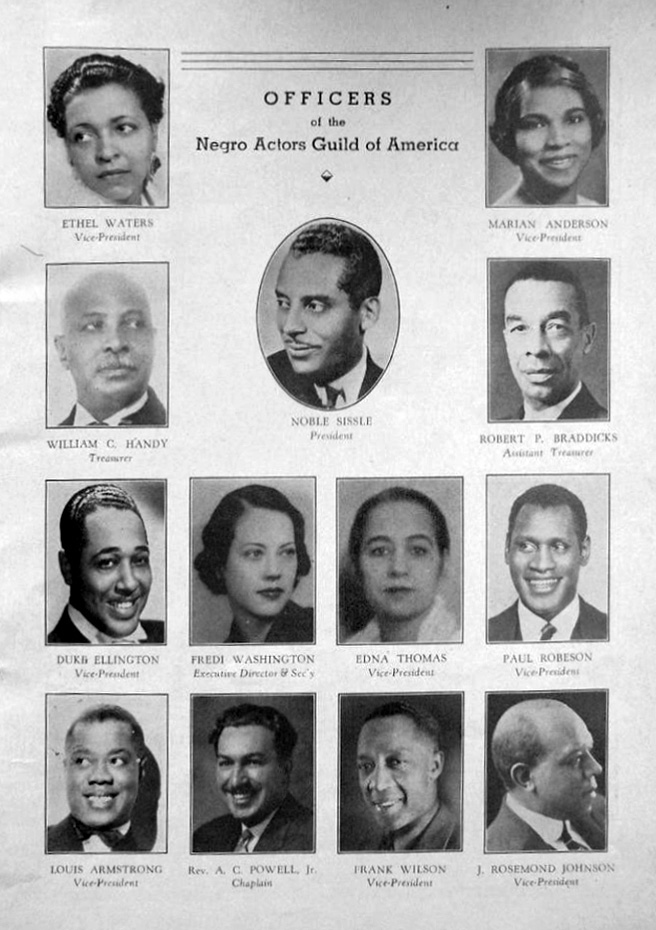 Officers of the Negro Actors Guild of America, 1938
Fair use image

Fredi Washington, a black stage and film actress, who was resentful of the limitations of African Americans in the film industry, brought together other actors, including Leigh Whipper, Noble Sissle, W.C. Handy, and Dick Campbell, to found the Negro Actors Guild of America in New York City in 1937.  It was the first such organization of its kind in the nation.  Noble Sissle served as the organization’s first president, while Washington served as the Guild’s executive director and secretary. Washington dedicated much of her life to the organization, even sacrificing her acting career for the advancement and prosperity of the Guild.  Leigh Whipper succeeded Sissle in 1957 as the Guild’s president.  He later caused some controversy when he accused Otto Preminger, the director for the film, Porgy and Bess, of discriminating against African Americans.

The Guild served as one of the primary financial and social resources for African American entertainers.  It provided health care, arranged transportation and hotel accommodations, and financed funeral services for the black thespian community.  Much of the funding for the Negro Actors Guild came from the Federal Theater Authority and internal fundraising.  Bill “Bojangles” Robinson was instrumental in fundraising efforts, often performing in benefit concerts on Broadway for the Guild.  Robinson later served as the Guild’s first honorary president

By the early 1940s, the Guild had more than seven hundred members.  Among their famous members were Hattie McDaniel, Ethel Waters, Bert Williams, and Lena Horne.  By the 1970s, the organization slowly faded as the film and theater industries became increasingly integrated.