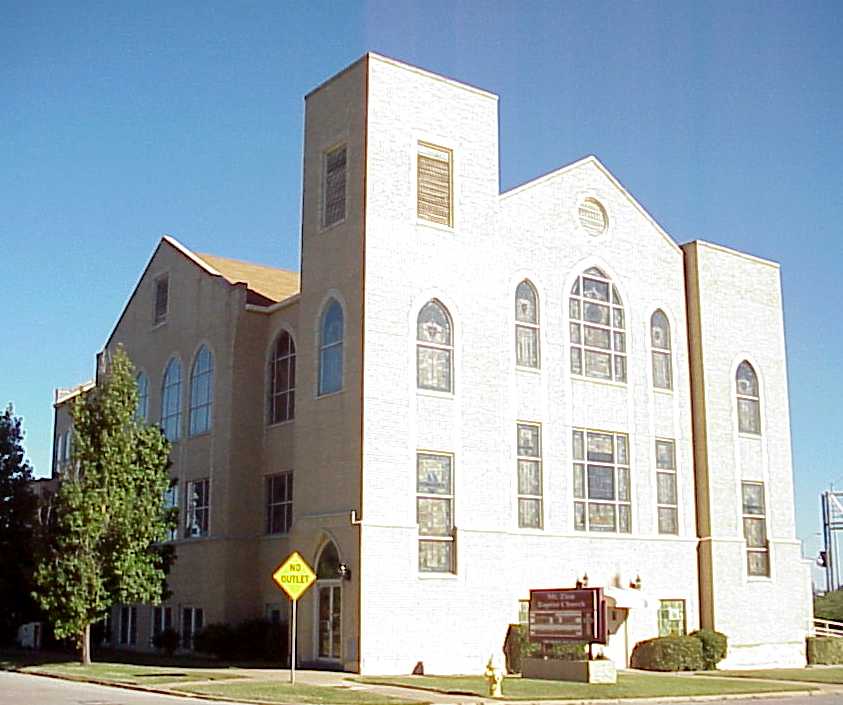 Mount Zion Baptist Church, originally named Second Baptist Church, was founded in 1909 by an African American religious study group under the leadership of Reverend Sandy Lyons, and established on North Hartford street of Tulsa, Oklahoma. At first, the church didn’t have it’s own building and the congregation gathering in a small one room school in the North Hartford area. Later the church was officially renamed Mount Zion Baptist Church and the congregation decided to relocate the church building to what was then a vacant lot on North Elgin Street, while beginning the process of raising money to build a permanent edifice.

Although Mount Zion Baptist had a new location, they did not raise enough money to build a new church and instead rented a facility.  In 1914 the landlord of the rented building told them that the space was no longer available to them, and they were forced to move out within three days. Because of the forced move, the church then relocated to a former dance hall on North Greenwood Avenue, where they continued holding their service. While holding their service in the dance studio, they built a frame tabernacle right next to the dance hall, to mark the exact spot in which they were going to build their own chapel. They began raising money and formulating a new building plan. It took the congregation years to accomplish both.

The congregation was able to raise only about $42,000 over the years of planning and fundraising for the new structure even though it would cost a total of $92,000.  Fortunately, an unnamed Jewish contractor came to their rescue, offering the church a $50,000 loan. With the combination of the money reverend raised and the loan, they were able to commence construction of their new church.

Starting with the construction of the new building in 1916, the $92,000 project would finally be complete in 1921. The congregation celebrated by holding their first service in the new building on April 4th, 1921. Two months later their new church would be reduced to rubble because of an enraged white community. The Tulsa Race Riot on June 1, 1921 destroyed dozens of businesses, and hundreds of homes and churches including Mount Zion.  Also at least 300 people, almost all African American, were killed in the riot.  Despite the riot, the church congregation was determined to rebuild Mount Zion. After years of fundraising, and holding services in various locales, the church was finally rebuild on the site of the 1921 structure.