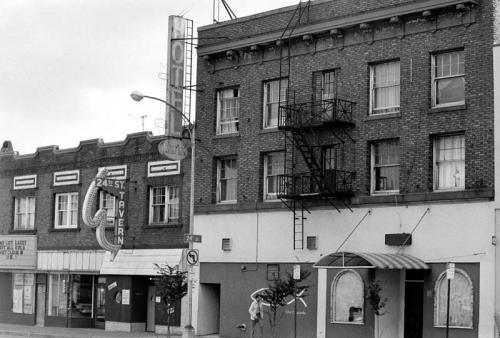 The Mother’s Day Disturbance of May 11, 1969, also called the Mother’s Day Riot, is viewed by many as the turning point in Tacoma, Washington’s civil rights struggle.  While Tacoma in the 1960s did not experience the violence that enflamed many northern cities, the Mother’s Day disturbance in the Hilltop community, the black ghetto of Tacoma, bore the seeds of similar frustration—a black population concentrated by residential discrimination in a deteriorating inner city neighborhood, the lack of economic opportunity and political representation, and the gulf between the promise of equal rights and the daily reality of black life.

Under Tacoma City Manager David Rowlands, the city in the late 1960s successfully applied for federal urban renewal programs to address conditions in the Hilltop area.  Conservative opponents of such programs attacked city leaders over radio station KAYE in neighboring Puyallup, dividing city opinion. The 1967 election of Mayor A.L. (Slim) Rasmussen, called by The Tacoma News Tribune “one of the wildest campaigns in local political history,” was a victory for those opposed to federal funding.  Rasmussen’s two-year mayoralty was marked by his attempts to oust Rowlands and to dismantle both the city manager form of government and the Human Relations Commission. The mayor also attacked a Model Cities planning grant directed to the Hilltop, which black community leaders took as a direct affront.

On Mother’s Day, 1969, the fuse blew.  An attempted arrest on the Hilltop led to a night of angry, youthful confrontation and property destruction, the shooting of a policeman, and charges of alleged police brutality. The riot started when Tacoma police officers, Herman Knaack and Arthur Jackson attempted to arrest a black felon. When he resisted, an African American woman from a nearby house began to scream “police brutality” and soon several other black residents gathered. Gunfire erupted and Officer Knaack was wounded trying to protect his partner. A riot ensued, lasting the rest of the night.

In the days immediately following the Mother’s Day Disturbance, black spokespersons demanded increased neighborhood services and black representation on the police and fire departments, which they achieved.  Scattered incidents of violence continued during the summer, although they were slight compared with the confrontations in such cities as Detroit or even nearby Seattle.

Rasmussen lost the election in 1969 and the next year, a citizens’ recall movement removed five council members by popular vote.  Two black candidates who had run unsuccessfully for City Council in 1969 would go on to successful political careers, both breaking political barriers.  Harold Moss was appointed to the council after the recall and in 1971 won election to the seat, the first person of color to hold elected office in Tacoma or Pierce County.  Rosa Franklin, also defeated in the 1969 council race, would become a member of the Washington State House of Representatives and a three-term State Senator.