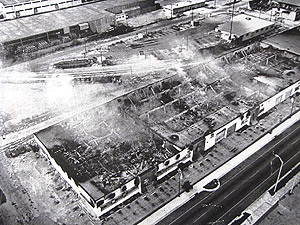 The Miami Riot of 1980 was the first major race riot since the late 1960s. In December 1979, a number of white Miami-Dade (Florida) police officers were involved in a high-speed chase involving black motorist Arthur McDuffie.   Police reports said that the chase ended when McDuffie crashed his motorcycle, ultimately leading to his death.  However, coroner reports suggested that the cause of death was not consistent with a motorcycle crash.  Later, a responding officer following the chase testified that there was no crash, and that the police officers had beaten McDuffie to death with their flashlights.

Even with the coroner report and the testimony from police and witnesses, an all-white jury concluded the trial on May 17, 1980 with the acquittal of all officers involved in the McDuffie police brutality case.  News spread to the surrounding areas and residents of mostly African American Liberty City, home to half of the city’s black and Afro-West Indian residents, took to the streets in protests which soon turned violent as some protesters began throwing objects at passing white motorists who drove through the area.

By nightfall on May 17, the violence escalated into a full blown riot as angry blacks attacked motorists fleeing their vehicles.  The riot moved into neighboring white business districts and the headquarters of the Dade County Department of Public Safety.

When black leaders from the Miami-Dade County National Association for the Advancement of Colored People (NAACP) and national leaders such as Jesse Jackson were unsuccessful in halting the violence the Florida National Guard was then called in to aid the Miami-Dade police force. The Guard and local police blocked off Liberty City and from that point confined the riot to Liberty City. By May 20th order was restored. Ten blacks and eight whites died in the Miami Riot. More than 800 people had been arrested in the four day period and the property damage to the area was in excess of $80 million dollars.

Some have also argued that the riots were a clear example of the dissatisfaction and alienation of a younger post-Civil Rights/ Black Power generation of African American youth with both the tactics and strategies of an older generation of black leadership as well as with continuing racial discrimination. Their blatant disregard of the efforts of leaders like Jesse Jackson to end the conflict showed the growing gap between the views of the two generations. Coming twelve years after the Martin Luther King Riots in April 1968, the Miami conflict served as a reminder of the possibility of urban insurrection in underprivileged neighborhoods.