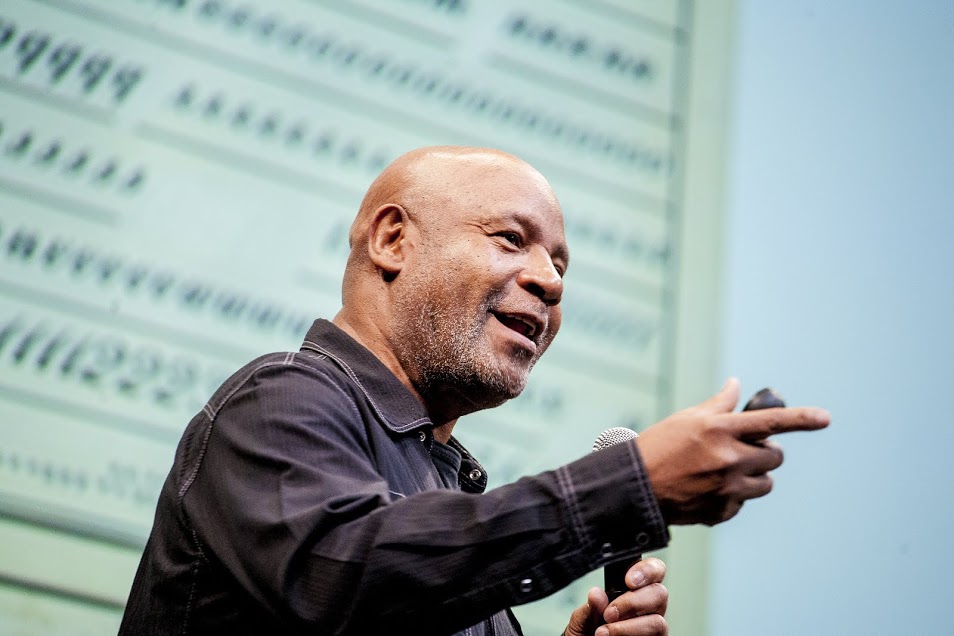 Emory Douglas served as the Minister of Culture for the Black Panther Party from 1967 to 1980.

Originally from Grand Rapids, Michigan, Douglas and his family moved to San Francisco for health reasons in 1951. At age 15 Douglas was sent to the Youth Training School, a youth authority detention facility in Ontario, California, where he was introduced to art through classes on basic print and graphic design.  After his release in 1960, Douglas would eventually continue his art training at City College of San Francisco by taking courses on commercial design where he gained valuable experience with design techniques, print publication, and art critique.

In early 1967, he became involved with the Black Arts Movement at San Francisco State University as a set designer for the Black Communications Project. Douglas met Huey Newton and Bobby Seale, founders of the Black Panther Party, at a meeting regarding the organization’s security detail for Betty Shabazz’s upcoming visit to San Francisco.  After this encounter, Douglas joined the Panthers and began going on police patrols in Oakland where he met many of the community people who would later be the inspiration and subject for his work.

Douglas is most noted for his political drawings and cartoons in the Black Panther Newspaper of Police as Pigs and of a black proletariat armed for self-defense.  His provocative style visually articulated the injustices experienced by African Americans living in the inner-city, the growing militancy and organization among urban black youth to resist police violence, and the need for community based social programs. In addition, Douglas’s use of rich colors, dark bold edging, and photos of everyday black people to make collages, created an authentic style that expressed the ideological platform of the Black Panthers and the heightened community consciousness of Black Power as a political concept.

After the Party’s demise in the early 1980s, Douglas worked as the layout artist and graphic designer for the San Francisco-based Sun Reporter Publishing Company for 21 years before retiring in 2005.  That same year, a collection of his work was compiled in the edited book, Black Panther: The Revolutionary Art of Emory Douglas.  Douglas continues to dedicate his artwork to social justice and health and has most recently served as Artist in Residence at Elam International School of Fine Arts, in Auckland, New Zealand. Douglas, who lives in San Francisco, continues his work with many community based organizations.