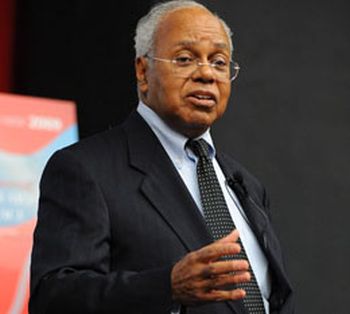 One of the four North Carolina Agricultural & Technical freshmen who initiated the Sit-In Movement at Greensboro, North Carolina. A native of North Carolina, Joseph McNeil saw Greensboro’s race relations as a mirror image of the social structure of most southern cities. McNeil recalls having discussed the issue of segregation with community members like local businessman, Ralph Johns, in the weeks before the initial protest.

McNeil — along with Franklin McCain, Jibreel Khazan (Ezell Blair, Jr.), and David Richmond —  had grown frustrated with the idea that patience and long suffering alone would allow Blacks to prosper. In their Scott Hall Dormitory rooms the young men read books about Gandhi, studied the writings of W.E.B. Du Bois, and debated the merits of direct action. On January 31st 1960, they agreed to stage a public act of non-compliance with segregation. The following afternoon the four met at the A & T campus library and walked together to Woolworth drug store where they broke the law by sitting at a segregated lunch counter. A national chain, Woolworth stores would feel the effects of the protest beyond Greensboro. McNeil later recalled feeling a deep sense of relief during the first day of the Sit-In campaign.

When the store closed for the evening the “A & T Four” hurried to campus to recruit additional protestors. Three days later, McNeil and his colleagues joined the women of Bennett College in forming the Student Executive Committee for Justice. The executive committee would strategize the picketing of downtown Greensboro stores from February 1, 1960 until July 25th, six months later, when Woolworth and Kress drug stores opened their lunch counters on a non-segregated basis.

McNeil earned a degree in engineering in physics from N.C. A & T in 1963. He also became a captain in the United States Air force and later worked as an aviation inspector in New York State. McNeil married Ina Brown and the couple has five children.