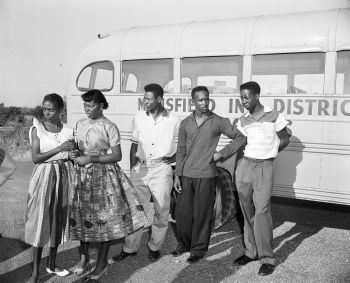 The desegregation of public schools in Mansfield, Texas was one of the most contentious in the state and eventually garnered national attention as the evolving civil rights struggles moved to the forefront of the country’s conscience.  In Mansfield, African Americans campaigning for civil rights in general and school integration waged a ten-year campaign to gain equal access to public schools in that community.

As a result of the 1954 U.S. Supreme Court ruling in Brown v. Board of Education, the Mansfield school district was ordered to desegregate by Texas federal judge Joe Estes.   It became the first Texas school district affected by the Brown ruling.  The school board approved a measure to allow the Mansfield High School to desegregate but Mayor William Arnold “Bud” Halbert and Police Chief C.G. Harwell vowed that they would not comply with the Board’s decision.

In 1955, the Mansfield Independent School District (ISD), which numbered fewer than 700 whites and 60 blacks, segregated its black students into a four-room elementary school in the city.  High school students were required to ride a bus into nearby Fort Worth and then walk twenty blocks to the all-black I.M. Terrell High School.

During the same year, the Mansfield National Association for the Advancement of Colored People (NAACP) filed a lawsuit on behalf of three black high school students (T.M. Moody, John F. Lawson, and Mark Moody), insisting that they should attend the high school in their community. The Mansfield NAACP hired Fort Worth attorney L. Clifford Davis to represent their interest to the school board.

Encouraged by their defiance, on August 30 and 31, 1956, an angry mob of nearly 400 whites surrounded Mansfield High School to prevent the enrollment of three African American students.  Angry white residents hanged the three black students in effigy and outside reporters and observers were attacked.  At one point the town’s sheriff, Harlan Wright, who attempted to confront the mob, was threatened.  Downtown stores closed as a show of support and vigilantes met all cars entering town, barring integration sympathizers.

Texas Governor R. Allan Shivers, who opposed the Brown decision, called out the Texas Rangers at Mansfield to prevent any black students from entering the public school.  Shivers ignored the federal court order for integration by authorizing Mansfield ISD to send its black students to Fort Worth, Texas.

The Mansfield incident was the nation’s first example of a failure to enforce a federal court order for the desegregation of a public school.  The Mansfield School Incident encouraged later violent confrontations in Little Rock, Arkansas in 1957 and at the University of Mississippi in 1962.  More immediately it was the principle factor in the passage of the 1957 segregation laws by the Texas state legislature which delayed integration for several years.  In 1965, faced with loss of federal funds, the Mansfield school district finally desegregated, its decade-long defiance of a federal school integration order was one of the longest in the nation during that period.