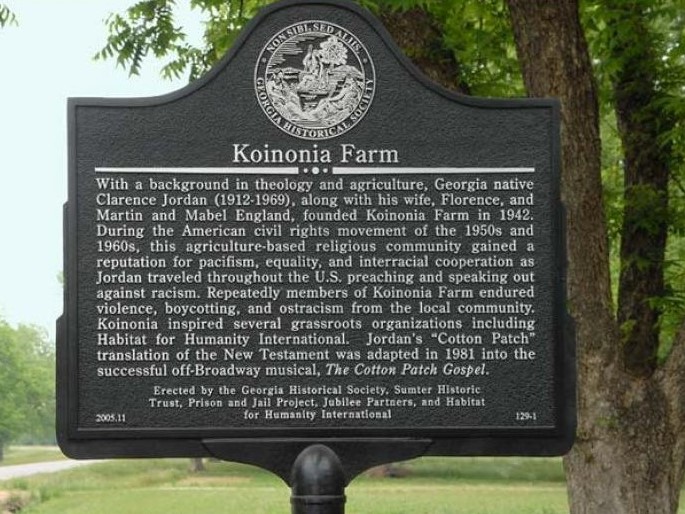 Established in 1942, Koinonia is a collective farm in Sumter County, Georgia that supports interracialism as an element of Christian community values. Inspired by both his Christian faith and his training in agriculture at the University of Georgia, founder Clarence Jordan believed that poor white and black farmers shared similar problems in supporting their families. Jordan and his wife Florence partnered with Northern Baptist minister Martin England and his wife Mabel to create Koinonia as a site of Christian fellowship and agricultural education. The farm has provided a model of racial egalitarianism as an alternative to the culture of Jim Crow that historically pervaded much of the region.

Clarence Jordan (1912-1969), the principal founder of Koinonia, was born in Talbotton, a small town in the heart of rural Georgia, and grew up as the son of a prosperous county merchant. He was profoundly shaped by the Southern Baptist culture of his community but also by broader “Social Gospel” values of the era. After graduating from the University of Georgia, Jordan attended the Southern Baptist Theological Seminary in Louisville, Kentucky, eventually earning a doctorate by studying the Greek New Testament.

While in Louisville, Clarence Jordan began to practice the Christian interracialism that became central to his life in later years. These experiences also introduced him to Martin England, a northern Baptist minister interested in collective farming. Both Jordan and England believed creating an interracial co-operative would alleviate the poverty of sharecroppers across the color line while also demonstrating Christian values of harmony and virtue. Thus they established Koinonia Farm. The community was built around four core beliefs: treat all human beings with dignity and justice, choose love over violence, share all possessions and live simply, and be stewards of the land.

A handful of black and white families joined the co-operative farm. The group also encouraged visitors to create similar cooperatives around the region. Koinonia members produced vegetable and fruit crops, pecans and dairy products that were initially marketed locally to support the farming venture.

By the 1950s the rise of civil rights activism brought greater outside attention to Koinonia, including violence and harassment. A series of attacks on Koinonia property and its members culminated in a 1956 Ku Klux Klan rally denouncing the farm and supporting segregation. Both violence and a local boycott of Koinonia farm products in southwest Georgia prompted the organization to sell its produce through a mail order business that continues to this day.

As public attention to the Civil Rights movement in Georgia began to decline in the late 1960s, Koinonia Farms sought to revitalize interest in poverty reduction. This effort was inspired by the interests of Alabama businessman Millard Fuller. Fuller and his wife moved to Koinonia in the late 1960s and began an intensive program to provide improved housing to poor residents of Sumter County. Their program eventually become known as Habitat for Humanity International.