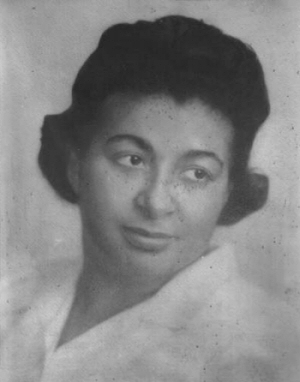 Marjorie Edwina Pitter King, the youngest of the Pitter sisters, was born March 8, 1921, to Edward A. Pitter and Marjorie Allen Pitter, in Seattle, Washington. When she graduated from Garfield High School, she joined her sisters at the University of Washington to study for an accounting degree in the College of Economics and Business. Like her father, she had a passion for numbers, business and the value of a dollar. So, to help the family with college expenses for her and her sisters, she came up with an entrepreneurial venture called “Tres Hermanas,” or “Three Sisters.” Together they earned money by typing, printing and writing speeches to help pay for their books, tuition and the like. Aside from having fun with her sisters, she enjoyed herself at the University. She worked for a sociology professor who counseled students in and outside of his discipline, including Pitter (later King). According to her, he always seemed to have a receptive ear for her concerns and tried to advise her as best he could, knowing little about her major. Commercial Law, Anthropology and Statistics were her three most enjoyable courses, because of the creative manner in which they were taught—interactive, with a team approach.

However, Marjorie Pitter King experienced difficult, hurtful moments as well. Frequently she was on academic probation because of low grades. Since few women of any race studied accounting during the Great Depression, her experiences may have been related to sexism, too. She was called unkind names and often ignored by her professors during her stay there. In 1942, she transferred in her senior year to Howard University in Washington, D.C. to complete her graduation requirements. Later she returned to Seattle and established a successful tax business called M and M Tax and Consultant Services. Extremely active in politics, she was appointed to the State Legislature in 1965, becoming the first African American in that body.  King served until 1966. She served as Chair of the 37th District Democratic Party, Vice President of the King County Democratic Party and Treasurer of the Washington State Federation of Democratic Women, Inc. She provided leadership in drafting the National Democratic Party Platform, while attending the 1972 Democratic National Convention.