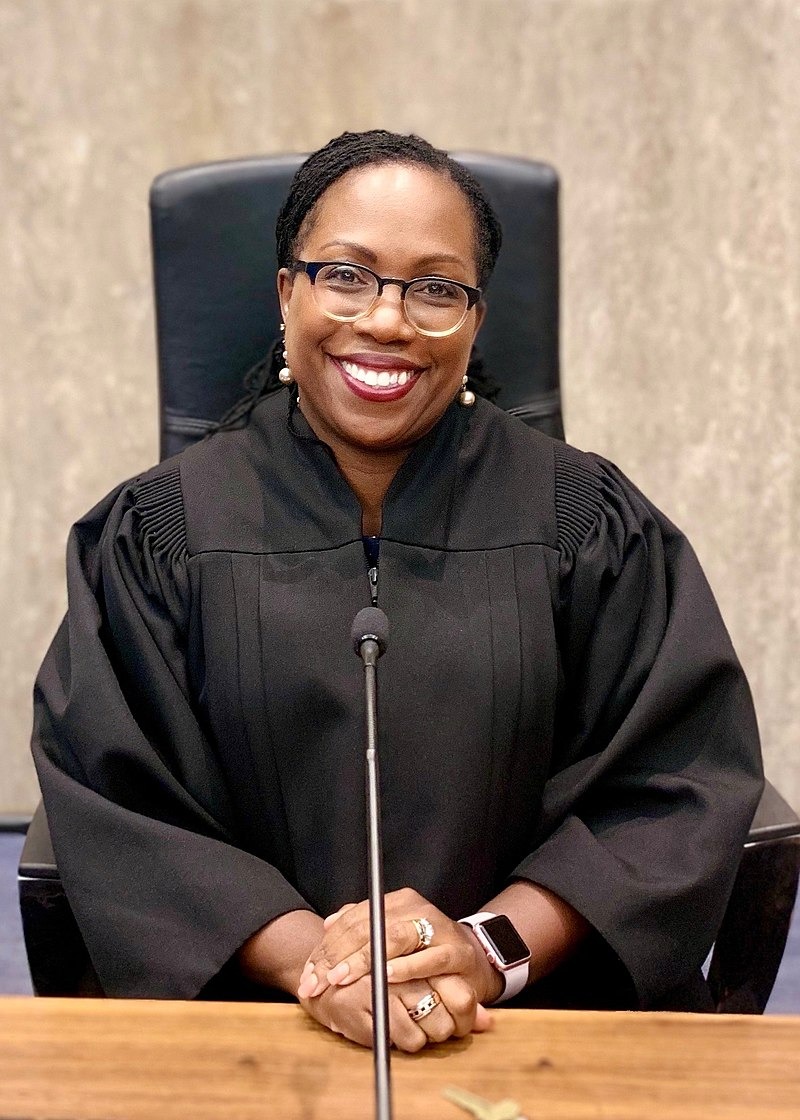 On February 25, 2022, President Joe Biden nominated United States Court of Appeals Judge Ketanji Brown Jackson to fill the vacancy on the U.S. Supreme Court created by the resignation of Associate Justice Stephen Breyer. Two months later on April 7, she was confirmed by the U.S. Senate to be the 116th Associate Justice of the Court and the first Black woman to serve on the high bench in its 233-year history. Scheduled to take her seat on the Court at the beginning of its term on October 3, she is only the third African American, after Thurgood Marshall and Clarence Thomas, to serve on the highest court in the United States.

Ketanji Onyika Brown was born September 14, 1970, in Washington, D.C. Her parents later moved to Miami, Florida, where her father, Johnny Brown, became chief attorney for the Miami-Dade County School Board, and her mother, Ellery Ross Brown, became a school principal at New World School of the Arts. An uncle, Calvin Brown, served as Miami’s police chief.

Brown graduated from Miami Palmetto Senior High School in 1988 and then attended Harvard University, where she majored in government and graduated magna cum laude with an A.B. degree in 1992. After graduation Brown worked as a staff reporter for Time magazine from 1992 to 1993, then attended Harvard Law School, graduating in 1996. After law school she clerked for Judge Patti B. Saris for the U.S. District Court of Massachusetts from 1996 to 1997 and then for Judge Bruce M. Selya of the U.S. Court of Appeals for the First Circuit (Maine, Massachusetts, New Hampshire, Rhode Island, and Puerto Rico) from 1997 to 1998. She then spent a year in private practice before clerking for U.S. Supreme Court Justice Stephen Breyer, from 1999 to 2000.

In 1996 Brown married surgeon Patrick G. Jackson of Boston, Massachusetts. The couple have two daughters, Leila and Talia. After working in private practice again from 2000 to 2003, Brown Jackson then served as an assistant special counsel to the U.S. Sentencing Commission from 2003 to 2005. From 2005 to 2007, she was an assistant federal public defender in Washington, D.C., where she handled cases before the U.S. Court of Appeals for the D.C. Circuit.

On July 23, 2009, President Barack Obama nominated Brown Jackson to become vice chair of the U.S. Sentencing Commission. After the Senate confirmation she served on the Commission until 2014. While she was on the Commission, it amended sentencing guidelines to reduce federal sentences for crack cocaine offenses and implemented other reforms in sentencing for drug crimes.

On September 20, 2012, President Obama nominated Jackson to serve on the U.S. District Court for the District of Columbia. She was confirmed by the Senate on March 22, 2013 and was sworn in by Justice Breyer on May 10, 2013. During her time as a District Court judge, Brown Jackson wrote a number of decisions that challenged President Donald Trump including a November 29, 2019, 120-page decision ordering the president’s former White House counsel Donald McGahn to comply with a legislative subpoena. She wrote: “Stated simply, the primary takeaway from the past 250 years of recorded American history is that presidents are not kings.” While conservative activists pointed to this and a number of other decisions being reversed by higher courts, of Jackson’s nearly 600 opinions fewer than 12 have been reversed.

On March 30, 2021, President Biden nominated Brown Jackson to serve as a U.S. circuit judge for the U.S. Court of Appeals for the D.C. Circuit, where she replaced Judge Merrick Garland who became attorney general in the Biden administration. On June 14, 2021, the U.S. Senate confirmed her nomination with a bipartisan vote.