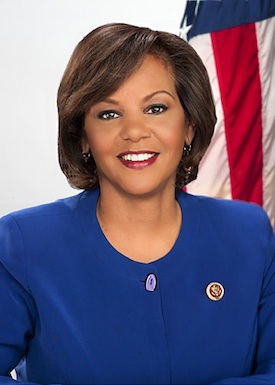 Democratic Congresswoman Robin Kelly represents Illinois’s 2nd District, which includes Kankakee County and parts of Cook and Will Counties. It includes Chicago’s south suburbs and Southeast Side. Kelly was first elected on April 9, 2013, when the state of Illinois held a special election to fill the vacancy left by Democratic Representative Jesse Jackson Jr.’s resignation. Kelly won re-election in 2014 and 2016.

Born in New York City, New York, on April 30, 1956, Robin Lynne Kelly is the daughter of a grocer and postal worker. She attended Rhodes Prep High School (NY) where she graduated in 1973. Kelly continued her education at Bradley University in Peoria, Illinois where she earned her bachelor’s degree in psychology in 1977 and master’s in counseling in 1982. She was awarded her PhD in political science in 2004 from Northern Illinois University in DeKalb, Illinois.

Prior to becoming a member of Congress, Kelly was a counselor and community affairs director in Matteson, Illinois, from 1992 to 2006. She joined the Illinois State House of Representatives in 2003 and was chief of staff for Alexi Giannoulias, the Illinois State treasurer from 2007–2010. In this position, she was the first African American woman to serve as chief of staff to an elected constitutional statewide officeholder. From 2010 to 2012, Kelly was the Cook County chief administrative officer. She became congresswoman in 2013.

Congresswoman Kelly and her husband, Dr. Nathaniel Horn, married in 2003 and live in Matteson, Illinois. She has two grown children and two stepchildren. Her non-political interests include travel, nonfiction, crossword puzzles, and sports.