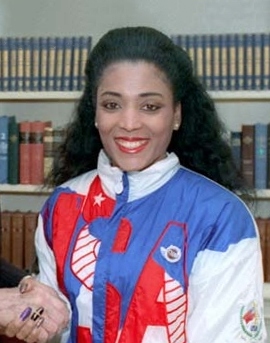 Born Florence Delorez Griffith on December 21, 1959, in Los Angeles, California, Florence Griffith Joyner was the seventh of 11 children. Joyner and her siblings were raised primarily by their mother in the impoverished Watts neighborhood of Los Angeles. She began competitive sprinting at the early age of seven, and practiced by chasing jack rabbits in the California desert while visiting her father. After breaking her high school sprint records, Joyner gave up racing at age 19 in order to help support her family.

Sprinting coach Bob Kersee found Joyner working as a bank teller in 1979, and convinced her to train with him at the University of California, Los Angeles (UCLA).

Joyner won the Silver Medal in the 100m dash at the 1984 Olympics in Los Angeles, although her flamboyant style attracted more attention than her speed. That would change while qualifying for the 1988 Olympics, when she shattered the world record in that event with a time of 10.49 seconds. She easily won the Gold Medal in that event, and went on to break another world record in the 200m with a time of 21.34 seconds. Both records are still standing, and her times are faster than the men’s records in many countries.

In 1988, Joyner was named the Associated Press Female Athlete of the Year and the United States Olympian Committee Sportswoman of the Year. She was inducted into the U.S.A. Track and Field Hall of Fame in 1995 and is a recipient of a Distinguished Service Award from the United Negro College Fund.

Florence Joyner is remembered not only for her speed but for her “one-legger” running suits, her long, brightly painted fingernails, and her large flowing hair. She was an athlete, fashion designer, spokesperson, writer, actress, as well as wife and mother. In 1993 she served on the President’s Council on Physical Fitness and Sports. Former President Bill Clinton recalls “We were dazzled by her speed, humbled by her talent, and captivated by her style.”

Florence Griffith Joyner died in her sleep in 1998 as the result of an epileptic seizure. She was 38 years old. Her Los Angeles elementary school has been renamed in her honor.