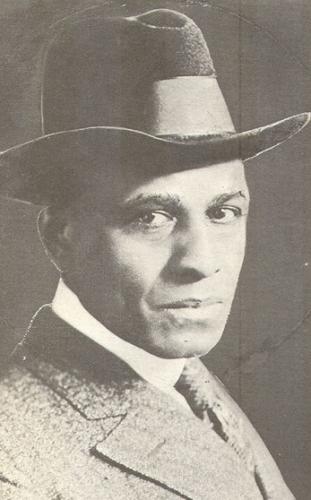 Charles Sidney Gilpin, an actor, singer, and vaudevillian dancer, was the most successful African American stage performer in the early 20th Century.  He is best known for his portrayal of Brutus Jones in Eugene O’Neill’s The Emperor Jones. A Richmond, Virginia, native, Gilpin attended St. Francis School, a Catholic institution for colored children, until age 12, and served as a printer’s assistant at the Richmond Planet (c. 1890-1893). Gilpin married three times. His first wife was Florence Howard (married c. 1897). He met his second wife, Lillian Wood, when he was with the Lafayette Players. His third wife was Alma Benjamin Gilpin.

Gilpin showed great promise early on as a singer appearing in amateur theatricals in Richmond. He went to Philadelphia, Pennsylvania, in the early 1890s, where he worked briefly for the Philadelphia Standard, but was let go after some employees complained about working with a Negro.

Thereafter, he worked permanently as a performer, touring with several traveling minstrel and vaudeville shows between 1896 and 1904.  In 1903, for example, Gilpin joined Hamilton, Ontario’s Canadian Jubilee Singers.  He also performed with Gus Hill’s Smart Set for one season (1904-05), playing Remus Boreland, the mayoral candidate in The Black Politician.  In 1906 Gilpin sang with the male chorus in Bert Williams and George Walker‘s Abyssinia on Broadway and on tour. After the tour, Gilpin founded the Pekin Stock Company at Robert T. Motts’s famed Pekin Theatre Company in Chicago, Illinois.

Gilpin acted in a variety of roles in plays as Captain Rufus (1907), The Husband (1907), The Merry Widower (1908), The Man Upstairs (1909), and The Chambermaid 1908). Between 1910 and 1911, Gilpin also starred in several productions for Jesse A. Shipp’s Stock Company that absorbed the Pekin Stock Company. From Chicago, Gilpin moved to New York City, New York where he performed at the Lafayette Theatre in The Old Man’s Boy (as Tom Bolden).  He was also the play’s Vocal Director from 1913 to 1914.

In 1915, Gilpin joined the Anita Bush Players at the Lincoln Theatre in Harlem as one of the featured performers. Bush changed the Company’s name to the Lafayette Theatre Players after it was relocated to the Lafayette Theatre, also in Harlem. As the Company’s star performer, he played in For His Daughter’s Honor, The Octoroon, and Within the Law. In 1916, Gilpin left the show during the rehearsal of Paid in Full over a salary dispute.

Between productions Gilpin worked temporarily as a barber, Pullman porter, and elevator operator.

In 1919, Gilpin played Reverend Custis, a former slave, in John Drinkwater’s Abraham Lincoln on Broadway. A year later, he landed the title role in The Emperor Jones at the Neighborhood Playhouse in New York City for a short run. The Provincetown Players mounted the show in Greenwich Village, where it ran for 399 performances, after which it toured throughout the United States and later in London, England.  Gilpin’s performances in the long running The Emperor Jones, established him as the most recognized black actor on the American Stage to play the lead in a serious drama. Due to his failing health and a nervous breakdown in 1924, Gilpin was replaced in The Emperor Jones by Paul Robeson.

Gilpin’s work was recognized when in 1921 he was named by the Drama League of New York as one of the 10 best artists who had made valuable contributions to American Theatre.  Gilpin was the first African American actor so honored.  Gilpin later received the National Association for the Advancement of Colored People (NAACP) Spingarn Medal in 1921 and was honored by a formal dinner at the White House hosted by President Warren G. Harding.  In 1922 the Dumas Dramatic Club (now the Karamu Players) of Cleveland, Ohio renamed itself the Gilpin Players in his honor.  Charles Gilpin died at age 52 in Eldridge Park, New Jersey.