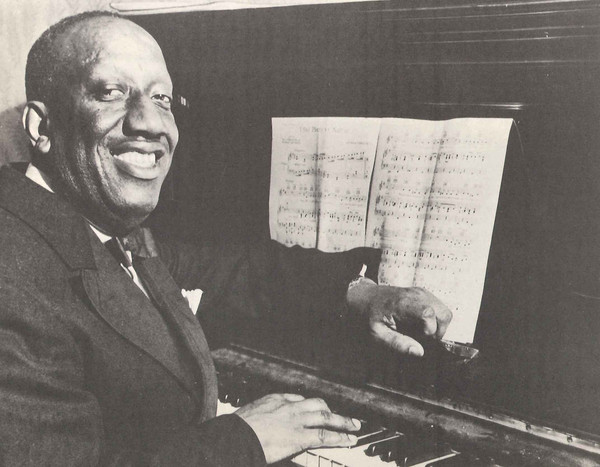 Mostly known as the “Father of the Stride Piano,” James Johnson transformed music during the Harlem Renaissance.  With his form of composition and performance style, he altered ragtime into a more ambitious musical presentation which incorporated elements of early jazz. Over his lifetime, Johnson would record over 400 piano slides (a piano slide essentially tells the player they are supposed to move from one note or pitch to another), compose or co-compose eleven musicals, and write more than 250 pieces of music.

James Price Johnson was born on February 1, 1894 in New Brunswick, New Jersey. His father William H. Johnson was a mechanic, and his mother Josephine Johnson worked as a housemaid. During his early life James Johnson was exposed to music. His mother Josephine obtained a piano in 1898 and taught him to play when he could barely reach the piano keys. His mother showed him melodies and simple chords of the then current music which consisted mostly of ragtime and early blues pieces. Johnson’s swift attraction to and adaption of that music was evident as he quickly memorized in perfect pitch all of the pieces his mother taught him.

In 1902, Johnson’s family moved to Jersey City where the eight-year-old heard early ragtime strains coming from brothels and salons throughout the town. At home Johnson duplicated the music he heard, and eventually was noticed by a neighbor who hired him to play at a brothel. At the age of nine, James Johnson started seeing local instructors and learned music at school.

In 1908, Johnson’s family moved to San Juan Hill, the pre-Harlem black community in New York City, New York. There Johnson was exposed to more musical genres including symphonies and trained under a mentor, Charlie Cherry, who was a ragtime pianist. Johnson continued to grow as a musician, moving up the job ladder from performing in brothels and saloons to more respectable venues including restaurants and private parties. By 1913, James Johnson follow artists such as Luckey Roberts and Eubie Blake from San Juan Hill to the new black community at the north end of Manhattan called Harlem.  He also followed them from ragtime to early jazz.

In 1917, 23-year-old Johnson began recording piano rolls for record labels including Perfection, Aeolian, and Artempo. By the early 1920s he began producing and recording musicals. In 1923 his musical, Runnin’ Wild, introduced the song “Old Fashioned Love” as well as his most popular hit, “The Charleston.” In 1927, Johnson staged his most ambitious musical production, Yamekraw – A Negro Rhapsody, followed by Harlem Symphony (1932) and Symphony in Brown (1935).

Over his lifetime, James Johnson had 19 strokes. In 1940, Johnson’s career was stymied when he suffered a major stroke.  He survived and continued to perform but he could never duplicate his earlier success. In 1945, semi-retired James Johnson staged Harlem Symphony at Carnegie Hall with Joseph Cherniavsky conducting, where he would also have another stroke. Ten years later Johnson suffered a final, lethal stroke. He died November 17th, 1955 in Jamaica, New York at the age of 61. He was survived by his wife, Lillie Mae Wright.