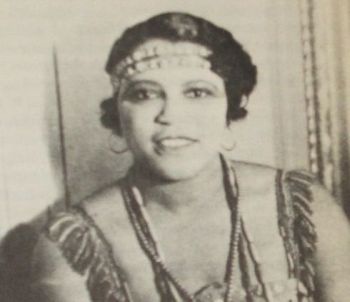 Caterina Jarboro was born one of three children in Wilmington, North Carolina, to an American Indian mother and a black father who was a local barber. She was christened Katherine Lee Yarborough at St. Thomas Catholic Church in Wilmington.  She received elementary school education at St. Thomas, and later attended Gregory Normal School.  Her parents died when she was thirteen years old, and in 1916, she traveled to Brooklyn, New York, to live with an aunt.

Jarboro studied music in New York where her exceptional ability soon became apparent. By 1921 she appeared in popular theater musicals, such as Sissle and Blake’s “Shuffle Along,” and later in James P. Johnson’s, “Running Wild.” Like many black musicians and performers, she sought more opportunity for study and experience in Europe. Under contract to the San Carlo Opera Company, Jarboro debuted in Verdi’s Aida in 1930 at the Puccini Theater in Milan, Italy.  She continued to study in France and to perform in small productions in Europe until 1932 when she returned to the United States.

In 1933 Alfredo Salmaggi, recruited her to perform Aida with the Chicago Civic Opera at the New York Hippodrome Theater. The music editor at the New York Times praised her vivid performance and her perfect Italian diction. This appearance made Jarboro the first black opera singer to perform with a major company in America.   First Lady Eleanor Roosevelt expressed gratitude to Salmaggi for introducing Jarboro and other black opera singers to the American stage in her column, “My Day,” in 1946.

Jarboro followed Aida with an outstanding performance of Seleka in Meyerbeer’s L’Africaine in New York. She also created and performed the lead role in Cameron White’s Ouanga at the Chicago Ravinia Festival. The New York Metropolitan Opera Association invited her to become a member, but when they realized she was not Italian, but Afro-Indian, they denied her membership. After a lengthy and successful career she declined membership when a second invitation was extended.

Jarboro returned to Europe where she repeated her American roles with great success.  In 1936 she created in French the starring role in Die Konigin Von Saba, at the Theatre de la Monnaie in Brussels, Belgium. Jarboro continued to perform regularly in several European countries until her return to the United States in 1941 where she often gave benefit performances and concerts at Carnegie Hall and Town Hall in New York City.  She retired from singing in 1955.  Jarboro was honored at a ceremony in Wilmington, North Carolina’s Thalian Hall in 1975, and a star in her memory was placed on the city’s Walk of Fame in 1999. Jarboro died in New York City in 1986 at the age of eighty-three. She was survived by a brother, Joseph, of Philadelphia, and a sister, Anna Gayle, of Palmetta, Florida.