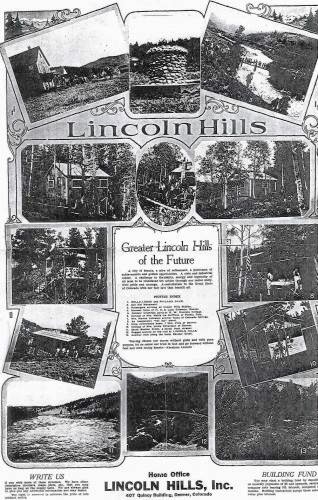 In the years prior to World War II, the Lincoln Hills Country Club was a renowned vacation development for African Americans in the Rocky Mountains of Colorado. Located in Gilpin County, an hour outside Denver, between Pinecliff and Rollinsville, Lincoln Hills was for years the only African-American resort area west of the Mississippi River.  Other African American resorts included Oak Bluffs in Martha’s Vineyard, Massachusetts; Idlewild in Michigan; and American Beach in Florida.

Lincoln Hills was the brainchild of African-American entrepreneurs Robert E. Ewalt and E.C. Regnier, who in 1922 created the Denver-based Lincoln Hills Development Company which sold mountain property to African Americans to build summer cabins at a time when they were not otherwise allowed to obtain lodging or enjoy the amenities of public parks in Colorado.

The resort area extended over 100 acres on both sides of the Denver and Salt Lake Railroad which brought the cabin owners and their guests to the resort.  Over 600 lots were sold in the 1920s and 1930s.  Most of the lots were small, only 25 feet by 100 feet and they sold for between $50 and $100 depending on the location in the resort.  Some owners came from as far away as New York and California.

Lincoln Hills was also home to Winks Lodge, a full-service resort that was the country club’s major attraction, and Camp Nizhoni, a summer camp for prominent African-American girls offered by the Phyllis Wheatley Branch of the YWCA.

The Lincoln Hills Country Club began a slow decline in the Great Depression when many cabin owners were forced to sell or abandon their properties.  The end of the resort came quietly in the mid-1960s.  In 1964 the Civil Rights Act outlawed racial discrimination by predominately white country clubs and resorts.  Many affluent African Americans then joined the larger, integrated facilities.   One year later Obrey Hamlet, the owner of Winks Lodge, died and the property was sold. With the lodge closed there was a reduced interest in owning property at the Lincoln Hills Country Club.

Andrea Juarez, “A Home in the Hills,” Denver Urban Spectrum (May 2007) at http://www.urbanspectrum.net .