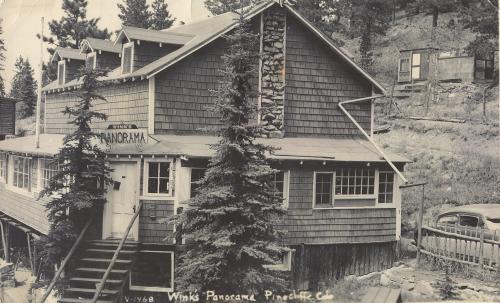 In the years prior to World War II through segregation, Lincoln Hills Country Club was a renowned vacation development for African Americans in the Rocky Mountains of Colorado. Located in Gilpin County, an hour outside Denver, between Pinecliff and Rollinsville, Lincoln Hills was for years the only African-American resort area west of the Mississippi River.  Other African American resorts included Oak Bluffs in Martha’s Vineyard, Massachusetts; Idlewild in Michigan; and American Beach in Florida.

At the epicenter of Lincoln Hills was Winks Lodge, a full-service resort. In the early 1920s Denver entrepreneur Obrey Wendell Hamlet, who was also known as “Winks,” saw opportunity and set out to build a resort in the budding area. He and first wife Naomi Hamlet began construction of a three-story, six-bedroom lodge in 1925 and finished it by 1928.

The resort was officially named “Winks Panorama,” though it became commonly known as “Winks Lodge,” and was visited during the summer and early fall.  The structure was built into the side of a hill, and its base and north walls were built of native rubble granite and authentic river rock from the area. While the first floor was primarily used for storage, the second floor and main entry had an extensive wraparound porch built of hand-hewn pine beams and posts, where breakfast, lunch and dinner were served to thousands of guests and diners over the years. The lodge’s six bedrooms and single bath were located on the upper floor.

In addition to the lodge, Winks also built several other properties, including the orange cabin, where he lived while building the lodge; a honeymoon cabin; the tin house; a three-plex cabin; and the tavern, which offered live entertainment and a jukebox.

Guests from across the country visited the lodge, including such luminaries as singers Billy Eckstein, Lena Horne, Duke Ellington, bandleader Count Basie, and writers Langston Hughes and Zora Neale Hurston. Many of those who stayed at the lodge also performed in Denver’s Five Points. According to Niccolo Werner Casewit, a historical researcher who has studied the facility, “Winks Lodge has been likened to the literary salons during the Harlem renaissance. Except this one is nestled in the mountains.”

The Hamlets (after Naomi’s death, Obrey and second wife Melba), owned and operated the lodge, providing room and board to guests for 37 years until Obrey Hamlet’s death in 1965. Winks lodge was added to the National Register of Historic Places in 1980.

Andrea Juarez, “A Home in the Hills,” Denver Urban Spectrum (May 2007) at http://www.urbanspectrum.net