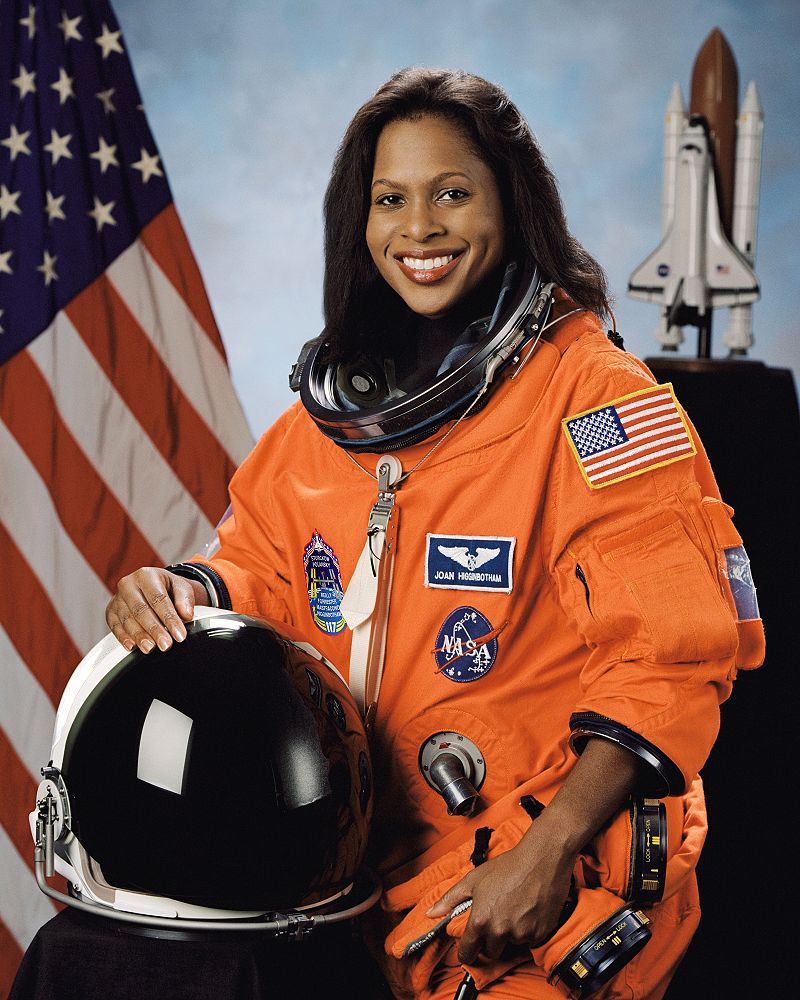 Joan Elizabeth Higginbotham was the third African American woman to go into space. Higginbotham was born on August 3, 1964 in Chicago, Illinois. As a youngster she loved cycling, music, and motivational speaking. She attended Whitney Young Magnet High School in Chicago and graduated in 1982. She then attended Southern Illinois University Carbondale and received a Bachelor of Science in 1986. Higginbotham continued her education at the Florida Institute of Technology, where she received a Masters of Management in 1992 and a Masters in Space Systems in 1996.

Although Higginbotham did not finish her education until 1996, she started her career in 1987. She was a Payload Electrical Engineer in the Electrical and Telecommunications Systems Division at the Kennedy Space Center in Florida. She occupied this position for six months until she became the lead for the Orbiter Experiments on OV-102, the Space Shuttle Columbia. After completing this position, Higginbotham served as the Executive Staff Assistant to the director of Shuttle Operations and Management. Higginbotham then served as backup orbiter project engineer for OV-104, Space Shuttle Atlantis, where she participated in the integration of the orbiter docking station into the space shuttle used during Shuttle/Mir docking missions. Higginbotham occupied this position for two more years before she was promoted to lead orbiter project engineer for OV-102, Space Shuttle Columbia. Here she was the technical lead government engineer in the firing room where she supported and managed the integration of vehicle testing and troubleshooting. She participated in 53 space shuttle launches during her first nine years at Kennedy Space Center.

After nine years at the Kennedy Space Center, Higginbotham was selected as an astronaut candidate in April of 1996 by NASA. The following August she reported to the Johnson Space Center in Houston, Texas to begin training. During her time at the Johnson Space Center, Higginbotham was assigned technical duties in the Payloads & Habitability Branch, the Shuttle Avionics & Integration Laboratory, and the Support Branch where she tested various modules of the International Space Station for operability, compatibility, and functionality prior to launch.

Higginbotham’s last assignment was the Lead for the International Space Station Systems Crew Interfaces Section. This led her to be part of the crew of STS-116 in 2006 where she logged over 308 hours in space during the mission. This assignment made her the third African American woman to go into space. Her primary task during the mission was to operate the Space Station Remote Manipulator System.

After the successful mission, Higginbotham was initially assigned to the crew of STS-126 for September 2008 but on November 21, 2007 she resigned from the astronaut program to pursue a career in a private sector. Higginbotham has received many rewards such as the Adler Planetarium Woman in Space Award and the Black Rose Award by the League of Black Woman both in 2007, and an Honorary Doctor of Humane Letters in 2017 from the University of New Orleans, Louisiana.