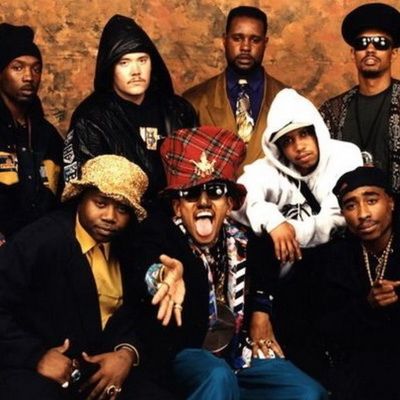 Digital Underground is a hip-hop group from Oakland, California. The group consists of Gregory Edward “Shock G” Jacobs, Jimi “Chopmaster J” Dright Jr, DJ Fuse, Ronald “Money-B” Brooks, and others over the career of the group. Digital Underground was credited in helping launch the career of future hip hop superstar Tupac “2 Pac” Shakur, who at one time was a member of the group.

The group was formed in 1987 in Oakland, California. Shock G originally wanted the group to be more militant in tribute to the Black Panther Party but their approach changed after other militant hip hop groups like Public Enemy and Niggas Wit Attitude (NWA) gained mainstream popularity. The group decided to take a more whimsical direction for the hip-hop audience as tribute to Parliament-Funkadelic. Their music style was already heavily influence by Parliament-Funkadelic since they sampled many of the older group’s songs in their own early records.

In 1990, Digital Underground released their debut album, Sex Packets which featured the singles “Doowutchyalike” and “The Humpty Dance” which debuted at number 11 on the U.S. Billboard Hot 100 and was certified platinum after selling over a million records. The song also introduced Shock G’s alter-ego “Humpty Hump,” a buffoon persona sporting colorful clothes and Groucho glasses. Eventually the Sex Packets album sold more than one million units and was certified platinum.

In 1991, the group released an Extended Play (E.P.) called This Is an E.P. Release. The E.P included the single “Same Song” which is credited with introducing to the world the young, upcoming rapper, Tupac “2Pac” Shakur who was feature on the song. This Is an E.P. Release sold more than 500,000 units and was certified gold. Later that year Digital Underground released their second album, Sons of the P which featured “Kiss You Back” and “No Nose Job.” That album would also sell over 500,000 units and be certified gold.

The group released other albums, including The Body-Hat Syndrome (1993), Future Rhythm (1996), Who Got The Gravy? (1998), and …Cuz a D.U. Party Don’t Stop! (2008). In 2010, Digital Underground released a second E.P. Called The Greenlight E.P. that featured previously unreleased tracks. Afterward, the group broke up to pursue solo careers. On April 22, 2021, Shock G was found dead in a Tampa, Florida hotel room from a drug overdose.