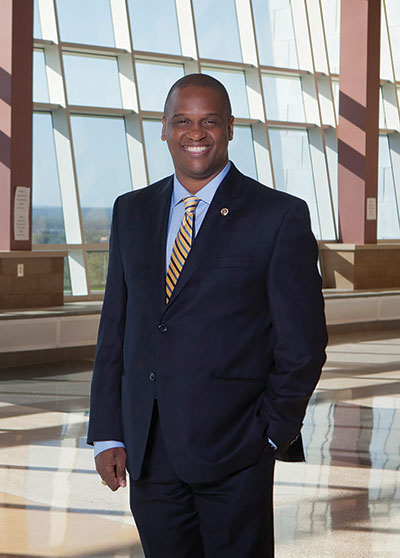 Otha Edward Thornton, Jr., the first African American President of the National Parent Teacher Association (PTA), was born in October of 1967 and reared in Elberton, Georgia, to Otha Edward Thornton, Sr., a Vietnam Veteran, and Estelle J Thornton. He was the oldest of seven. During his youth, Otha Jr. was a member of the Elbert County 4H Club. After graduating from Elbert County High School in 1985, he enrolled in Morehouse College in Atlanta, Georgia and received a Bachelor of Arts degree in urban studies in 1989. He also pledged the Alpha Phi Alpha Fraternity, Inc. while at Morehouse. After graduating he enlisted in the United States Army and was commissioned as a Second Lieutenant in 1999. He later earned a Master of Science degree in Rhetoric and Technical Communication from Michigan Technological University in Houghton, Michigan, in 2004.

Thornton married Caryn C. Thornton, an educator who graduated from Atlanta’s Spelman College. They have a daughter Candice and a son Otha.

In 2009, Thornton earned the Bronze Star Medal for exceptional performance in combat operations during Operation Iraqi Freedom. He was awarded an honorary doctorate from Michigan Technological University that same year. And in 2010, he was honorably discharged from the Army at the rank of Lieutenant Colonel.

Thornton continued working as the Principal Consultant for his establishment Thornton Consulting Group which he founded in 2010. During this period, he was also Chair of the Georgia Parent Teacher Association (PTA) and remained in that post until 2011. From 2011 to 2012, he was Senior Vice President of Business Development with Capital Commercial Development Group but later in 2012, Thornton named Senior Analyst/Operations Planner at General Dynamics Information Technology in Hinesville, Georgia 2012.

In 2013, Otha Thornton was installed as president of the National Parent Teacher Association (PTA) at the PTA’s annual convention at Duke Energy Convention Center in Cincinnati, Ohio. Thornton was the first African American to hold this leadership. He was endorsed by Arne Duncan, who served as education secretary under U.S. President Barack Obama.

As head of the National PTA Thornton focused on promoting leadership, advocacy, and membership in this 117-year-old organization that comprises 55 state congresses and 26,000 local units in 50 U.S. states, the District of Columbia, U.S. Virgin Islands, Puerto Rico, and the Department of Defense Schools in Europe and the Pacific.

In 2018, Thornton was a Democrat Candidate for the Georgia State Superintendent of Schools but was defeated in that contest by his Republican opponent, Richard Woods who garnered 53% of the vote as opposed to Thornton’s 47%. Thornton however polled 1,814,461 votes in his losing bid. He afterward pursued doctoral studies in Executive Leadership at the University of Charleston in Charleston, West Virginia.