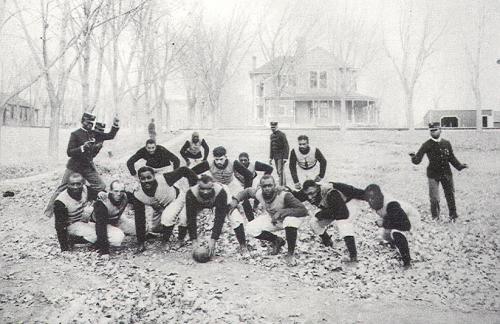 Fort Robinson, in the northwestern corner of Nebraska, was established in 1874 as a base for operations against the Northern Cheyenne and Lakota tribes.  Named for Lieutenant Levi Robinson, who was killed while escorting a woodcutting party near Laramie Peak in February 1874, the fort is best known as the site of the death of the Lakota chief Crazy Horse in September 1877 and the escape of the Northern Cheyenne from captivity on post during the frigid winter of 1879.  The fort also played a significant role in military operations during the Pine Ridge campaign of 1890-1891, and was the base from which the Ninth Cavalry deployed to Wyoming during the Johnson County (Wyoming) War of 1892.

Fort Robinson had black garrisons for nineteen years, a longer period of time than any other frontier fort.  Elements of the Ninth Cavalry served at the post, located on the headwaters of the White River, from 1885 to 1898, with troop strengths sometimes over 450.  The post was headquarters for the regiment from 1887 to 1898, and Colonel Edward Hatch, commander of the regiment from its inception in 1866, died there in the spring of 1889.  Robinson was also regimental headquarters for the Tenth Cavalry, much of which was stationed there from 1902 to 1907.  The fort also was home at one time or another to ten of the twenty-three black soldiers who received the Medal of Honor for bravery during the Indian wars and in Cuba during the war with Spain: Emanuel Stance, George Jordan, William Wilson, Thomas Shaw, Henry Johnson, John Denny, Augustus Walley, Brent Woods, William Tompkins, and George Wanton.  It was also the last duty station of the first black chaplain in the Regular Army, Henry Vinton Plummer, who was convicted there by a military court in 1894 of conduct unbecoming an officer and dismissed from the service.  The second and third black graduates of the United States Military Academy at West Point, John Alexander and Charles Young of the Ninth Cavalry, served there, as did Benjamin O. Davis with the Tenth Cavalry.

Fort Robinson remained an operational post until 1916.  Afterward it was the site of a cavalry remount depot and a training center for military dogs.  During World War II it also served as a prisoner-of-war camp.  The fort was finally closed in 1948.  Significant numbers of discharged and retired black soldiers once lived in the nearby town of Crawford.  An historical marker, noting the presence of the black regiments at Fort Robinson, was dedicated in the spring of 1997.