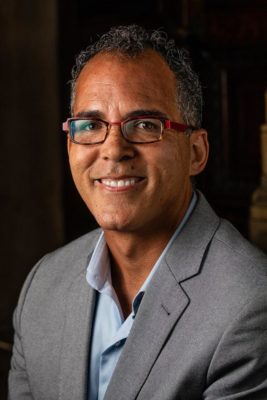 Though his parents separated when Forman was seven years old, they both remained very involved in the lives of their sons. In a sense James, Sr. and Constancia never separated emotionally, staying connected to their boys and to each other. Forman recalled how he never heard his dad saying one bad word about his mother, and the reverse was true, as well.

Forman grew up primarily in Atlanta, Georgia, with stretches of time in New York City and Detroit, Michigan. He credits his high school teachers at Atlanta’s Roosevelt High School for doing wonderful work under the constraining circumstances of underfunded public schools. During those high school years Harriet Beecher Stowe’s Uncle Tom’s Cabin and James Baldwin’s Notes of a Native Son made a significant impression on Forman. And in college he found The Jesse Jackson Phenomenon by Adolph Reed, Jr. to be particularly inspirational.

In 1988 Forman obtained a Bachelor’s degree from Brown University, and in 1992 he received a Juris Doctorate from Yale Law School. After law school Forman first clerked for Judge William Norris, and then for Justice Sandra Day O’Connor of the U.S. Supreme Court. In 1994 Forman became a public defender in Washington, D.C., a job he held for six years.

Discouraged about how insufficient educational and job guidance opportunities for his clients were and how that influenced their entry into the criminal justice system, Forman and lawyer David Domenici in 1997 co-founded the Maya Angelou Public Charter School in Washington, D.C., an alternative school geared to help at-risk young adults get the positive emotional and educational help they need. In 2007 the school expanded to be run inside D.C.’s juvenile justice system.

From 2003 until 2011 Forman taught at Georgetown Law, and since 2011 he has been teaching Constitutional Law at Yale Law School. At one of his seminars, law students study alongside men jailed in a Connecticut prison.

Along with numerous law reviews, Forman has written for The New York Times, The Atlantic, and other publications. His particular interests in criminal and educational policy, juvenile justice, and how aspects of race and class get entangled in the institutions of schools, prisons and police led to his first book in 2017. Titled Locking Up Our Own: Crime and Punishment in Black America, the book received wide notice and recommendations, and in April 2018 won a Pulitzer Prize in General Nonfiction.

Forman has been married since 2005 to nurse practitioner and yoga instructor Ify Nwokoye. Today they and their son Emeka live in New Haven, Connecticut.