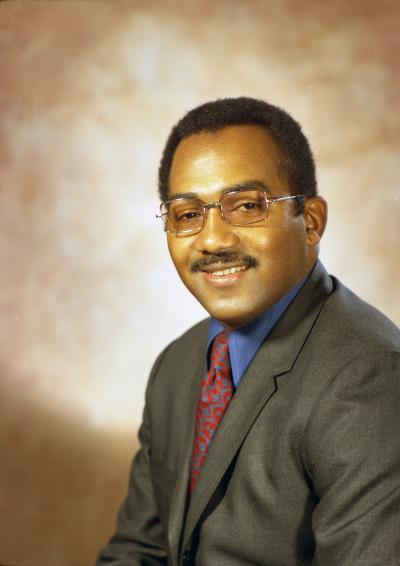 Washington State politician George Fleming was born February 22, 1937, in Dallas, Texas, to parents A.R. and Lilla N. Fleming. He started post secondary education at the University of Washington, Seattle. While attending the University, Fleming was running back and kicker for the Washington Huskies who was part of the 1960-61 team that won the Rose Bowl in Pasadena, California. In fact, Fleming scored the first points with a 44-yard field goal which was at that time the longest in Rose Bowl History.

In 1961, Fleming was the highest-drafted player into the National Football League from the Huskies. He went to the Oakland (California) Raiders as a second-round draft pick with an initial salary of $15,000 and a $3,500 signing bonus. In the 1961 season Fleming kicked a 54-yard field goal, a team record until 2003. He sat out the 1962 season, because of a salary dispute with the Raiders and the following year went to the Canadian Football League (CFL) where he played with the Winnipeg (Manitoba) Bombers. Fleming led the CFL in scoring as a rookie with 135 points and set a league record with a 55-yard field goal. Fleming retired from professional football in 1966.

In 1968, George Fleming was elected to the Washington House of Representatives. Two years later in 1970 he was the first African American to be elected to the Washington State Senate. While in the Senate he served as Vice-Chair of the Democratic Caucus from 1973 to 1980 and as Caucus Chairman from 1980 to 1988. While in office, Fleming was an advocate for the underprivileged, a state Martin Luther King Day holiday, control of illicit drugs, improvements in the quality of education, small business and economic development, and civil rights. He also fought to improve the quality of nursing homes for senior citizens and was an advocate of low income housing and emergency meals and shelter for the homeless. George Fleming retired in 1990 after twenty two years of service in the state legislature.

George Fleming passed away December 6, 2021 at his home in Seattle, Washington. He was 83 years old. Fleming is survived by his wife, Tina, their daughters, Sonja Fleming and Yemi Fleming Jackson; and five grandchildren.