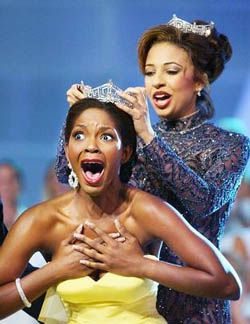 Dunlap was 21 years old when she won the title of Miss America. In contrast to two of her other fellow black titleholders, Vanessa Williams and Kimberly Aiken, who fell into pageants by happenstance, becoming Miss America was a goal that Dunlap had had since the age of six. The daughter of a roofing contractor and a nurse, she entered her first pageant in first grade.

An avid dancer, Dunlap became involved in clogging, ballet, and other forms of contemporary dance and joined a number of dance troupes in her youth. Oftentimes, she would find herself as the only African American student in these groups. As a result, Dunlap was the object of jokes from some blacks and resistance from whites who thought that such activities were the sole province of EuroAmericans.

It was, however, her intense interest in country music that made Dunlap unusual to her peers.  She and her mother frequently traveled to Nashville, Tennessee to enter music contests that they hoped would lead to a career in that musical field. At the age of 12 she landed an engagement at Opryland USA in Nashville. She also simultaneously competed in the beauty pageant circuit.

Dunlap entered the University of Central Florida and majored in communications. She also entered local pageants in the hopes of becoming Miss Florida. In 2001 she won the Miss Orlando crown. In 2002 she became Miss Heart of Florida and in 2003 she won the Miss City Beautiful pageant. Like many other eventual Miss Americas she lost several pageants before winning the title of Miss Florida. While attending the University of Central Florida, Dunlap became a member of Delta Sigma Theta sorority.

Dunlap entered the 2004 Miss America pageant and won the crown at Atlantic City in September.  She was crowned by her predecessor, Erika Harold, who was the sixth African American to wear the crown. During her reign, Dunlap’s platform was “United We Stand, Divided We Fall Behind: Celebrating Diversity and Inclusion.” During her reign she entertained troops in Kuwait and served as the grand Marshal of a NASCAR race.  She also publicly discussed how she was the victim of both intra-racial prejudice from blacks who challenged her activities and interracial prejudice from whites who taunted her for having dark skin. Such experiences made her determined to promote her views of racial tolerance and inclusion. Throughout her reign she made more than 100 speaking appearances promoting this issue.

During her post pageant years Dunlap has appeared on a number of television programs such as the Oprah Winfrey Show, Hollywood Squares, Live With Regis and Kelly, and others. On February 18, 2007, Dunlap married Brian Kleinschmidt and they both appeared together on the CBS television program The Amazing Race. Dunlap currently lives in Nashville and is pursuing a career in country music.