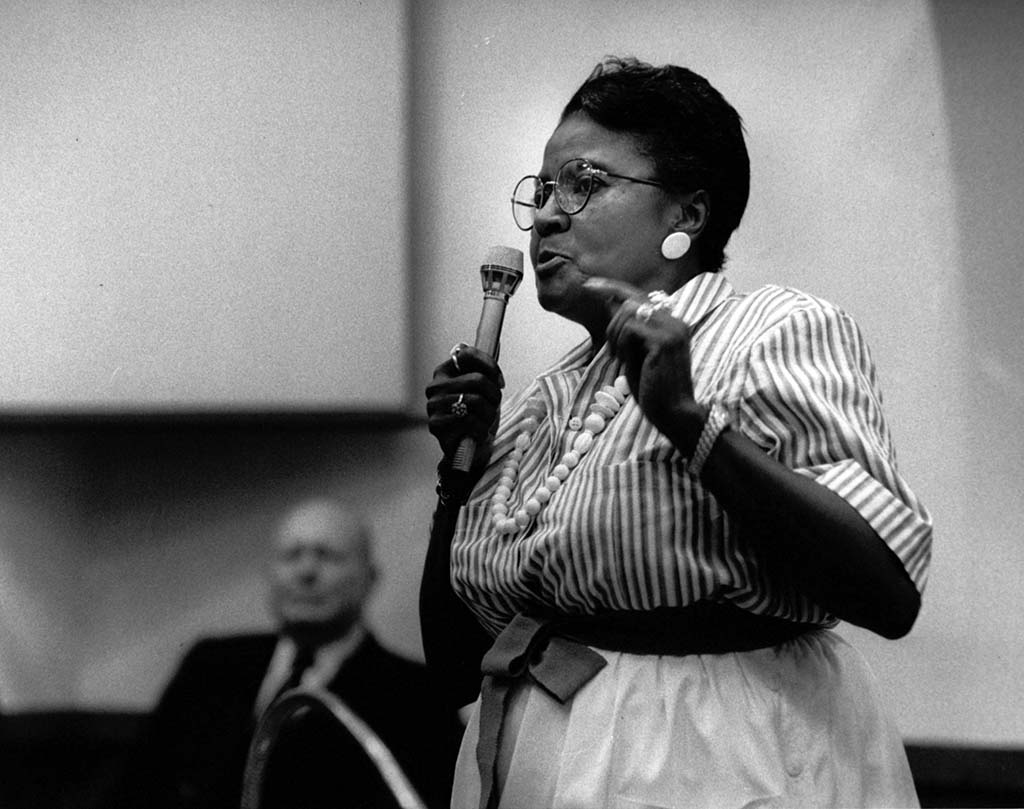 In 1968 Dorothy Bolden transformed domestic workers’ rights by founding the National Domestic Worker’s Union of America (NDWUA). Employed as a domestic for more than 40 years, Bolden created a union to promote their interests. The NDWUA helped domestic workers gain better wages, better conditions, and respect for their profession, and in doing so, became the longest surviving organization of domestic workers in the United States.

Dorothy Bolden was born on October 13, 1924 to Georgia Mae Patterson, a housekeeper, and Raymond Bolden, a chauffeur, in Atlanta, Georgia. She got her first glimpse of domestic work at the age of nine, washing dirty diapers for her mother’s employer at $1.25 a week.

Bolden’s early experiences working as a maid during the late 1940s in Atlanta initially inspired her civil rights activism. In one incident, her white female employer demanded that she stay and wash dishes even though her work hours were over. Bolden refused. She was arrested shortly after and was taken to county jail for psychiatric evaluation because she was seen as “crazy” for disobeying orders from a white person. She was never institutionalized, but this event inspired her to eventually create an organization to protect maids.

Before founding the NDWUA in 1968, however, Bolden in 1964 organized a boycott of Atlanta schools to protest the school board’s reluctance to improve the quality of education for African American students. In the mid-1960s, Bolden worked with Dr. Martin Luther King and other civil rights leader to confront police brutality, especially in her Atlanta neighborhood, Vine City.

The impetus for the NDWUA came from Bolden’s bus rides around Atlanta. She used public transportation to connect with other domestic workers, listening to their stories of low wages, long hours, long commutes, and unfavorable work conditions. Realizing their common experiences, Bolden began to mobilize these workers. In the summer of 1968, hundreds of women domestic workers gathered in Atlanta to form the NDWUA with Bolden as its first president in September of that year.

The NDWUA quickly enrolled thousands of domestic workers across ten cities in the United States. Through most of the 1960s, the national minimum wage was $1.25 an hour with black maids earning an average of $3.50 to $5.00 a day for twelve-to-fourteen hour shifts. The NDWUA demanded higher wages, and within two years of its founding, Atlanta maids earned an average of $13.50 to $15.00 a day. The NDWUA also made sure domestic workers benefited from Social Security and workers’ compensation.

As working conditions improved, Bolden taught maids how to negotiate with their employers or to find alternate employment if negotiations were unsuccessful. Thousands of women around the country utilized the NDWUA’s job placement programs and learned of their workplace rights. Bolden also understood the power of the ballot and made registration and voting a requirement for the members of the NDWUA.

Bolden became an influential political leader in the 1970s. She was appointed to President Richard Nixon’s advisory committee on social services and welfare. She later consulted with Presidents Gerald Ford and Jimmy Carter on workers’ rights. Bolden’s time and advocacy became divided between Atlanta’s community efforts and national politics as conditions for domestic workers across the country continued to improve year by year. However, she also had to use her own money to carry out NDWUA programs during the 1980s because federal funding did not suffice. The organization ceased operations in 1996, but Bolden continued to work in the social services sector until her passing in Atlanta on July 14, 2005, at the age of 80.