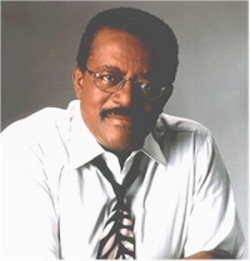 Johnnie Cochran Jr. was born on October 2, 1937 in Shreveport, Louisiana into a family descended from slaves.  His father was an insurance salesman and his mother sold Avon products. When he was a young boy, his family moved to Los Angeles, California where he grew up in an affluent and stable household with parents who stressed education and a color-blind attitude towards the world.  Cochran attended public schools where he excelled.  While his family was well-off, he always managed to find friends who had more than he did and seeing this pushed him even harder.

Cochran attended the University of California, Los Angeles and graduated in 1959 with a bachelor’s degree.  From there he went to the Loyola Marymount University School of Law where he graduated in 1962 with a law degree.  After passing the California Bar exam in 1963 Cochran began working as a deputy city attorney in Los Angeles.  In 1965 he formed his own law firm, Cochran, Atkins & Evans where he dealt with criminal and civil cases.  In 1966, he fought a case on behalf of a young black man who was shot by Los Angeles police officers while trying to get his pregnant wife to the hospital.  Cochran argued unsuccessfully that the police had used unnecessary violence.

Despite the loss, Johnnie Cochran soon developed a reputation in Los Angeles’s African American communities for handling cases involving police misconduct.  In 1977 he was named the Criminal Trial Lawyer of the year.  In 1978 Cochran returned for four years to government service as Assistant District Attorney for Los Angeles County.  He was the first African American to hold this position.  Soon after returning to private practice Cochran won at $750,000 judgment against the City of Los Angeles for the family of black college football player Ron Settles who had been killed by police.

By the 1990s Johnnie Cochran became known for handling celebrity criminal cases.  His clients included rapper Tupac Shakur, singer Michael Jackson, former football player Jim Brown, and former Black Panther Geronimo Pratt.  Cochran also represented Reginald Oliver Denny, the white trucker beaten by a mob during the 1992 Los Angeles Riots. However Cochran will forever be remembered as the lead attorney in the 1995 O.J. Simpson Trial where he engineered an acquittal for defendant Simpson.  His last major cases came in 2001 when he won an $8.7 million settlement against the City of New York in the Abner Louima police brutality case and 2002 when he successfully defended Sean “Diddy” Combs on a stolen weapons charge.

Johnnie Cochran, Jr., a member of Kappa Alpha Psi Fraternity, died on March 29, 2005 in Los Angeles at the age of 67 from a brain tumor.