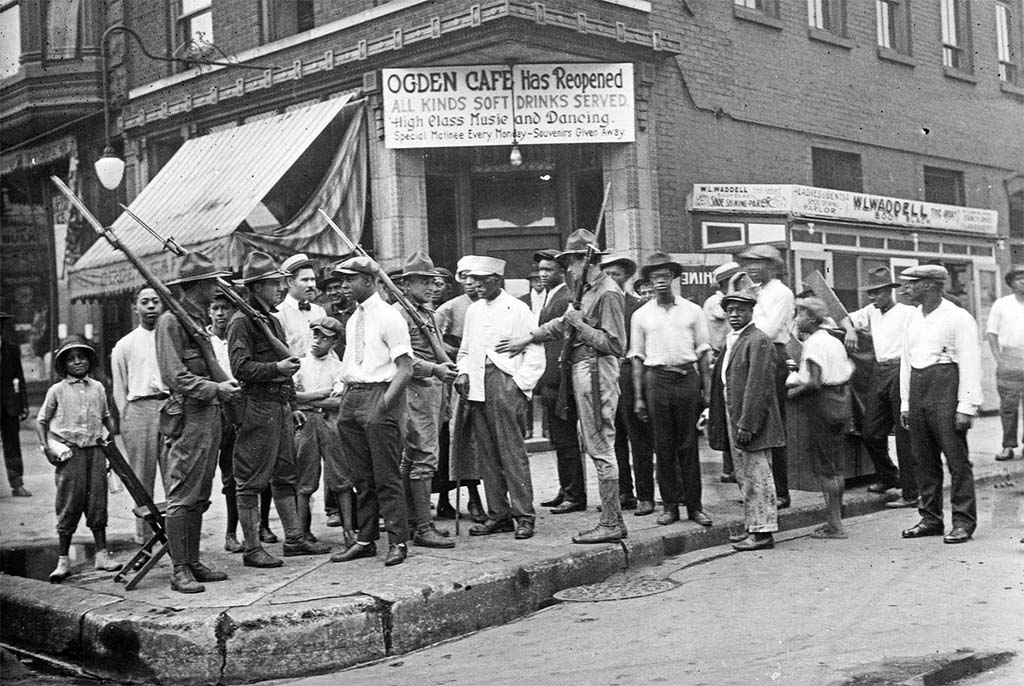 On July 27, 1919 when large crowds of white and black patrons went to the Lake Michigan beach in Chicago, Illinois to seek relief from the 96 degree heat, an angry dispute erupted over the stoning of Eugene Williams, a young African American swimmer who inadvertently crossed a segregated boundary into the “white” swimming area.  White beachgoers hailed stones at the young man causing him to drown. When police refused to arrest any whites, who were accused by black bystanders of having thrown the stones and instead arrested a black beachgoer on a white’s complaint of some minor offense, the blacks began to attack the white policeman. Reports of the incident spread throughout Chicago igniting a clash of white and black rioters across the city’s South Side.

This incident released years of accumulated racial tensions, starting from a constricting job market and the efforts by Chicago African Americans to secure adequate housing by moving into previously all-white neighborhoods as thousands of African Americans began arriving in the city during World War I as part of what would be called the Great Migration.

For seven days, bloodshed was rampant on the streets of Chicago.  Many African Americans became victims of white mobs when they had to pass through white neighborhoods in order to reach their workplaces.  Others were attacked on streetcars or in city parks and other public venues.  The majority of the rioting and violence was concentrated in the “Black Belt” section, the predominantly black neighborhoods on the South Side of Chicago.

At the height of the rioting, over four-fifths of Chicago’s 3,500 police officers had been sent to control the angry crowds. Many blacks stayed home fearing mob violence.  They often were not safe there as white mobs began to torch houses in African American neighborhoods.  Blacks fought back.  Often gangs of men attacked and stabbed white civilians, but white rioters had superiority in numbers and firepower and in many cases the sympathy of the police.

By the end of the violence twenty-three blacks and fifteen whites died, with more than five-hundred people injured and about a thousand people left homeless.