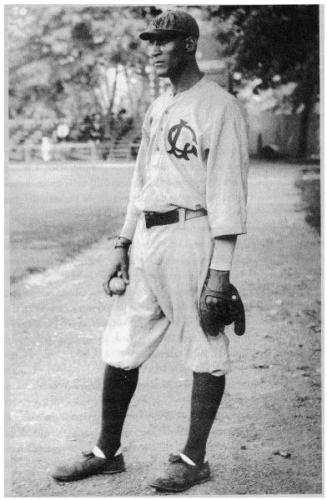 Born Joseph Williams in Sequin, Texas on April 6, 1886, “Smokey” Joe Williams (also known as “Cyclone” Joe Williams) is regarded as one of the greatest of the black baseball pitchers. In 1952, when the Pittsburgh Courier asked a panel of  veterans and sports writers to name the best Negro League pitcher of all time, Smokey Joe Williams was the winner over Satchel Paige, 20-19. He stood 6’ 5” and had a variety of power pitches but was best known for his fastball. He began to pitch around San Antonio in 1905 and compiled a record of 28-4. In 1907, he played for the San Antonio Broncos as a pitcher-outfielder, winning 20 and losing 8. In 1909, when Rube Foster, “The Father of Black Baseball,” brought his Leland Giants through San Antonio, he saw Williams pitch against Foster’s team and was amazed at his speed. Williams and his team beat the Giants 3-0. When the Giants left, they took Williams north with them.

On October 24, 1912, Williams faced the National League champion New York Giants in an exhibition game. The Giants were coming off a World Series loss to the Boston Red Sox. Williams shut out the Giants with only four hits for a 6-0 victory. By 1913, Williams won four and lost one against the white players in Major League Baseball (MLB).  At a time when professional baseball was not integrated and the Negro League teams were considered semi-pro, the victory over the Giants gave Williams and his team considerable national exposure.

Williams spent most of his best years (1912-1923) as a strikeout and location pitcher with the Lincoln Giants. A twenty-strikeout game was not unusual for him during that period.  His record for a single day game was twenty-five strikeouts in twelve innings against the Bushwicks soon after Williams was traded to the Brooklyn Royal Giants in 1924. In the mid-1920s, he became known as “Smokey” Joe, because he still had a blazing fastball even though he was approaching the age of forty. Williams struck out twenty-seven Kansas City Monarchs in a twelve-inning night game in 1930, at the age of forty-four.

Smokey Joe Williams died in New York City in 1946. The veterans committee elected him to the Baseball Hall of Fame in 1999.