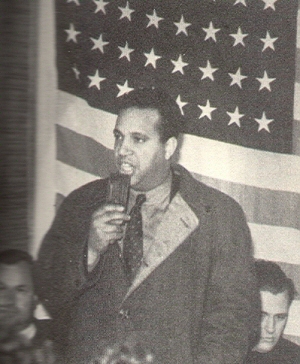 Revels Cayton, born in Seattle, Washington, was the son of Horace and Susie Cayton, and the grandson of U.S. Senator Hiram Revels. As a highly respected labor leader, he served as secretary-treasurer of the San Francisco District Council of the Maritime Federation of the Pacific and, later, the business agent for the Marine Cooks and Stewards Union.

Revels Cayton fought for civil rights throughout his life. In 1940, he joined Paul Robeson and five others in filing a discrimination suit against a San Francisco restaurant that refused to serve the group. He was the executive secretary of the National Negro Congress when, in 1946, it petitioned the United Nations Director-General to submit the “denial of constitutional rights to 13,000,000 U.S. Negroes to the international tribunal.” Cayton also sent President Harry Truman a telegram notifying him of the demand for “full freedom and absolute equality” for black Americans.

Cayton’s activities caught the attention of J. Edgar Hoover as early as 1943. A report, which included surveillance information on Seattle’s black population, was presented to the FBI director with the following notation: “At one time Revels Cayton, Negro Communist Party Member, presently in a functionary position in the Los Angeles Party setup, was an organizer in the Northwest. “Revels Cayton served as a member of the San Francisco Human Rights Commission, as deputy director of the San Francisco Housing Authority and as deputy mayor for social programs. He retired from public service in 1987. Revels Cayton died on Saturday, November 4, 1995, in San Francisco.