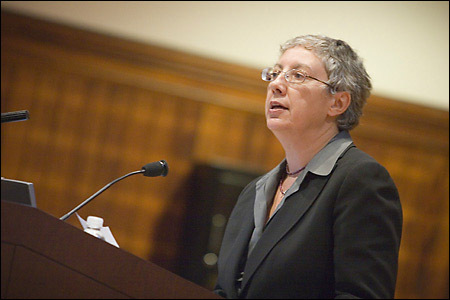 Hazel Carby is an African-American Studies scholar, a professor at Yale University in Connecticut, and holder of the Charles C. and Dorothea S. Dilley Chair in African American Studies.

Hazel Vivian Carby was born on January 15, 1948 in Okehampton, in Devon county, United Kingdom.  She was born to Iris Muriel Carby, a Welsh woman from a poor background; and Carlin Colin Carby, a Jamaican man, brought to the United Kingdom during an assignment with the British Royal Air Force.

She married Michael Denning, a Yale American Studies professor in 1982.  The couple have one child, Nicholas Carby-Denning.

Carby was an English high school teacher in East London from 1972 to 1979.  After teaching for a year at Yale University from 1981 to 1982, she taught at Wesleyan University in Connecticut from 1982 to 1989. In 1989, she returned to Yale University and has remained there since then.  She is currently the Charles C. and Dorothea S. Dilley professor of African-American studies, professor of American Studies, a researcher, and chair of the African-American department at Yale.

In addition to numerous articles on black history and black feminism, Carby has written three books. Her first book, Reconstructing Womanhood (1987), focused on 19th and 20th century African American women authors, linking cultural and sociological studies to literature, and questioning the previous works of other scholars on black feminist literature. This book has been established as an essential reading in the field of black literature and culture and feminist literature, and has placed Carby as a prominent scholar on these topics.

Her second book, Race Men (1998), questions the role of black masculinity in representing African Americans in political and social change through historic figures such as W.E.B. DuBois. Her third book, Cultures in Babylon (1999), is a collection of her various essays on black history and Culture in Britain and in the United States.

In 2000, she protested the lack of any substantial Yale University support for an African American Studies department at Yale by resigning her position for a short period. Her protest was a success, and the program evolved into an actual department shortly thereafter.

Hazel Carby has been defined as a “Marxist feminist,” and her work described as innovative and groundbreaking. She aims at making her academic work accessible to the greater public, and wishes to broaden African American studies to as a more interdisciplinary field within a global context and scope.