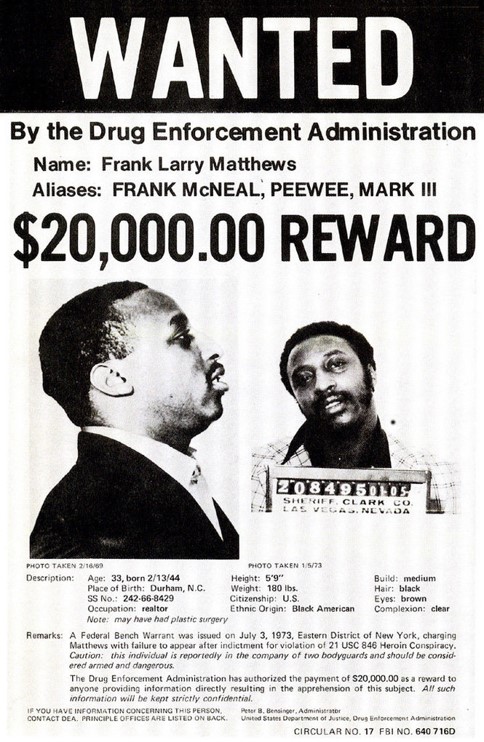 Frank “Black Caesar” Matthews was called one of the biggest heroin and cocaine traffickers in United States history by the Drug Enforcement Agency (DEA).  Born on February 13, 1944 in Durham, North Carolina, he became involved in several criminal incidents from a young age.  Matthews was raised by his aunt Marzella Steele due to the death of his mother when he was four.  Dropping out of school in seventh grade, he led a group of similarly aged children in stealing chickens in Durham.  He was arrested on a charge of assault and served a year at the state juvenile reformatory in Raleigh.  Upon release, Matthews moved to North Philadelphia, Pennsylvania.  There he hustled numbers for an illegal lottery. After his arrest in 1963, he was forced to leave Philadelphia.  Matthews continued hustling numbers but now as a barber in the Bedford Stuyvesant section of Brooklyn, New York.

In 1965, 21-year-old Matthews decided to jump into the heroin drug trade.  His connections made from his number-hustling days provided an excellent platform for his transition into a new area of crime.  At the time in the mid-1960s, the primary suppliers of heroin in the United States were the Italian Mafia crime families.  Initially, Matthews sought to join them and thereby enter the market.  However, despite being able to gain an audience with both the Gambinos and Bonannos, his application to join was rejected.

Matthews now turned to Roland Gonzalez, a Cuban American and one of the major drug dealers in Harlem.  Roland Gonzalez arranged for Matthews to get heroin and cocaine directly from Caracas, Venezuela and Marseille, France which would then be distributed in the United States. Their partnership quickly propelled Matthew’s illicit drug organization to the top of the New York drug business. Working with African American and Latino underbosses, by the early 1970s, Matthews oversaw a network had expanded into twenty-one states from Massachusetts to Alabama and west to Missouri.  Matthews spent his wealth lavishly.  He purchased a mansion for his girlfriend, Barbara Hinton, and his three sons on Rottenwood Road in Staten Island, New York.  In 1971, Matthews organized a conference of major drug traffickers who agreed to take control of the international shipment of heroin and cocaine to the United States, thus eliminating the Mafia middlemen.

Matthews’ drug empire continued to expand until January, 1973 when was arrested at the Las Vegas airport on charges of tax evasion and conspiracy to distribute heroin and cocaine.  He was tried, convicted, and sentenced to life in prison. Initially, his bail was set at $5 million as federal prosecutors felt he would flee.  However, his bail was reduced to $325,000 and he was freed the same day. Shortly after, on June 26, 1973, Matthews disappeared with $20 million in cash.  To this day, there have been no verified sightings as observers continue to debate whether he is dead or alive.