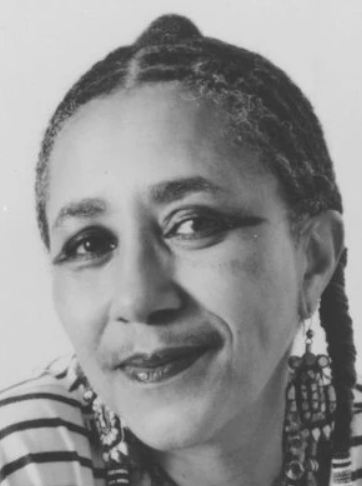 Camille J. Billops, artist, filmmaker, archivist, and professor, was born on August 12, 1933, in Los Angeles. Her parents were Alma Gilmore and Lucius Billops, and she has one sister, Billie. She married James V. Hatch, a professor of theater at the University of California, Los Angeles (UCLA), in October 1963.

In 1954, Billops entered University of Southern California to study art and occupational therapy. She transferred to California State University, Los Angeles, and graduated from that institution in 1960. She then briefly studied sculpture with a Huntington Hartford Foundation Fellowship. Thirteen years later, in 1973, Billops earned a master’s of fine arts degree from City College of New York and then studied for her Ph.D. at the Université Paris-Sorbonne in Paris, France.

By 1965 Billops had established an international reputation as a sculptor, printmaker, and photographer. Her work was exhibited in Egypt, West Germany, Pakistan, Taiwan, and the United States. Although her first exhibition was at the African Art Exhibition in Los Angeles in 1960, her other exhibitions have included the Valley Cities Jewish Community Center Los Angeles in 1963; the Gallerie Akhenaton in Cairo, Egypt in 1965; the Atlanta (Georgia) College of Art Gallery in 1989; and Washington Project for the Arts that same year. In 1978, she was artist-in-residence at the Asilah Festival in Asilah, Morocco, and her series of ceramic sculptures, “Remembering Vienna,” appeared in a number of venues in 1986.

Billops taught for the art departments of Rutgers University and the City University of New York. The United States Information Services sponsored her teaching of art classes in India.

Working with photographer James Van Der Zee and poet Owen Dodson, Billops created The Harlem Book of the Dead (1978), which includes a foreword by Toni Morrison.  Billops has served as editor of an art journal, The Afro-American, in 1976 and as art editor of Indiana State University’s Black American Literature Forum.

Billops was best known as a filmmaker. She directed several films, producing all with her husband through their company, Mom and Pops Productions. Their best known films include Suzanne, Suzanne (1982), which chronicled the life of a survivor of domestic abuse; Older Women and Love (1987), which explored inter-generational relationships; Finding Christa (1991), which documented Billops’s reunion with the daughter she gave up for adoption; and A String of Pearls (2002), which examined the struggles of men in her family, traversing four generations. Finding Christa received the Grand Jury Prize at the 1992 Sundance Film Festival.

In 1975, Billops and her husband founded the Hatch-Billops Collection, Inc., a non-profit research library of African American historical documents focusing on the arts. The library, now housed at Emory University, includes oral histories, slides, photography, and art that Billops and Hatch collected over two decades in their SoHo, Manhattan loft. They have published their interviews with African American artists, writers, and musicians in a journal, Artist and Influence.

Camille Billops died of a heart failure at her home in New York City on June 1, 2019. She was 85 years old. She is survived by her husband, James V. Hatch. Billops had one daughter, Christa Victoria, who she gave up for adoption in 1961. She died in 2019.